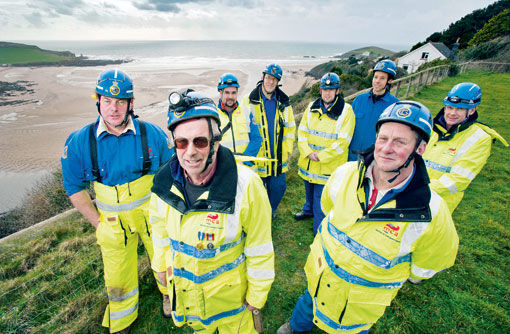 Standing on the top of a cliff in gale-force winds, with the sound of giant waves thundering below, I decide I could not be in better company. For I am meeting the crew of Bigbury Coastguard Rescue Team in South Devon, and if anyone is qualified to be out in those conditions, it’s this group of people.

But these are not full-time employees of the Maritime and Coastguard Agency, they are volunteers who give up their time to keep our coastal areas safe. Responsibilities include rescuing people and animals from cliffs or distressed boats, searching for missing persons and providing rapid response and communications in conjunction with emergency services, lifeboats and helicopter rescue teams.

It seems that farmers make up the backbone of the 362 rescue teams and 3,500 volunteers working around our coastline. With expert local knowledge and a can-do attitude, farmers make up six of the 10-strong team at Bigbury, headed up by vegetable producer Jeremy Gilbert. Other members include agricultural contractors, sheep farmers, an oyster farmer and, until recently, John Tucker, a mixed farmer with 49 years’ service as a coastguard.

Recently retired from the service, John has been involved for as long as he can remember. A farmer’s son from East Prawle, he and his four brothers followed in their father’s footsteps and signed up to the coastguard team as soon as they could.

“My father and grandfather would haul the equipment to the site using a horse and cart – I have vivid memories of the spare cart wheels lying around – six foot high so it could go into the sea.

“In the 1950s my friend John and I would ride on the tractor and trailer with our fathers to the training sessions. There were 20 members, split into four teams.”


Each team had its own job, setting up a tripod and rope pulley system, ready to fire across to the training ship’s mast and ferry people or equipment back and forth in a lifebelt called a breeches buoy.

“We would watch them set up at speed and get ready to fire the rocket – it was very exciting. We would run out for a ride in the breeches buoy – that was a real highlight.”

Officially only allowed to join at the age of 18, John signed up at 17. “Everyone joined up – if you’re in a close-knit community you all join up when you come of age. We’d been to practice sessions so many times we hardly needed training – we knew the drills inside out, and in the first year I joined we won the cup for the quickest and best team in the South West.

“My parents didn’t have a car when I was young, so we were quite marooned in respect of our social lives. But we knew the cliffs inside out, so would know where to go courting with girls. The first time I went to Burgh Island I was taking a girl home at 2am – we had to wait for the tide to go out.”

Back then a maroon, or loud rocket flare, would signal any emergency, and the team would scramble to the rescue station. In the case of a shipwreck, they would erect a tripod and rope system, fire a rocket to the ship’s mast to take over whip ropes and a hawser to ferry the breeches buoy across to the ship. This could then be used to carry people or equipment back to land – similar to a zip wire or relay system today.

When not busy with the coastguards, John and his brothers worked on the family farm growing sheep, beef, cereals, potatoes and cauliflowers. The farm expanded year-on-year to cater for the growing families.

“We had many fields which were right beside the sea, and that made them great for growing cauliflowers as there was less risk of frost due to the salt air,” he says. As the cauliflower enterprise grew, the brothers started delivering to markets as far afield as Oxford, earning sufficient profits to reinvest in the business.

In 1970 John married his wife Jane, after meeting her at the Young Farmers’ Club Christmas party, and moved away to farm at nearby Chillington. “Exactly 12 months before the Penlee lifeboat disaster, a china clay boat ran aground in a Force 11 gale. We couldn’t get the lines over to her, and the Penlee’s sister lifeboat got the lines caught in her propeller and had to be cut free. A helicopter came out and, while it was hovering, a wave hit the boat and went straight up into the engine. It coughed and nearly stopped, then caught again. There were four or five people on the boat and it got them all off. The boat wasn’t there the next day and we were all thanking our lucky stars.”

The family moved to Mount Folly Farm, Bigbury-on-Sea, in 1983, and steadily expanded it over the years to its current 650 acres with cereals, sheep, beef, camping, car parking and self-catering cottages. “We stopped growing potatoes and cauliflowers in the late 1990s when supermarkets took over from the nation’s corner shops.”

Jane and John’s daughter Cathy does all the paperwork and administration, leaving John to run the farm alongside his coastguard duties. “When they increased the number of practices from four a year to 10, my brothers came out of it, because they weren’t going to leave a field of hay to attend a practice. But if the maroon goes off you just drop everything and go – it has to come first.”

The team attends about 20-30 call-outs a year, rescuing people and animals from cliff faces, tourists with broken ankles and windsurfers stuck on the rocks.

“It’s very different at Bigbury – at East Prawle there were lots of container ships running aground – here it’s more about small yachts and land rescues because of the holidaymakers. I’d never done a cliff rescue until I came here. A lot has changed over the years – we don’t fire the rockets any more, radio communications are brilliant and we have proper protective clothing and safety gear.”


Even though he is now officially retired, John still has binoculars set up looking across the estuary, and he has seen his share of tragedies. Through those binoculars he once witnessed a small boat going out in rough conditions, which capsized.

“I called the Hope Cove lifeboat but it was too late, and two men drowned. Another time, two girls fell off the cliff at Burgh Island after a party – we got them away but one must have been brain damaged and didn’t survive. In 1991 four girls went to the pub and only three came back – the fourth fell off the cliff leaning into the wind. You do get affected by that – every time I go fishing in that spot I have a thought about that girl – she would have a family by now. It takes a long time to get over anything like that.”

However, John has also saved hundreds of lives and received the Queen’s Jubilee and Long Service medals. “Doing a good job is a highlight – we’re not in it for the glory. When you complete a rescue, you feel as if you’ve done some good. I never get cross with people – the people we rescue are not foolish, they have just made a mistake. I would urge other people to join up for the training, the job satisfaction and to save lives. When a farmer saves a lamb or a calf it feels good, and this is the same. As farmers we don’t stand back – we just jump in and help.”