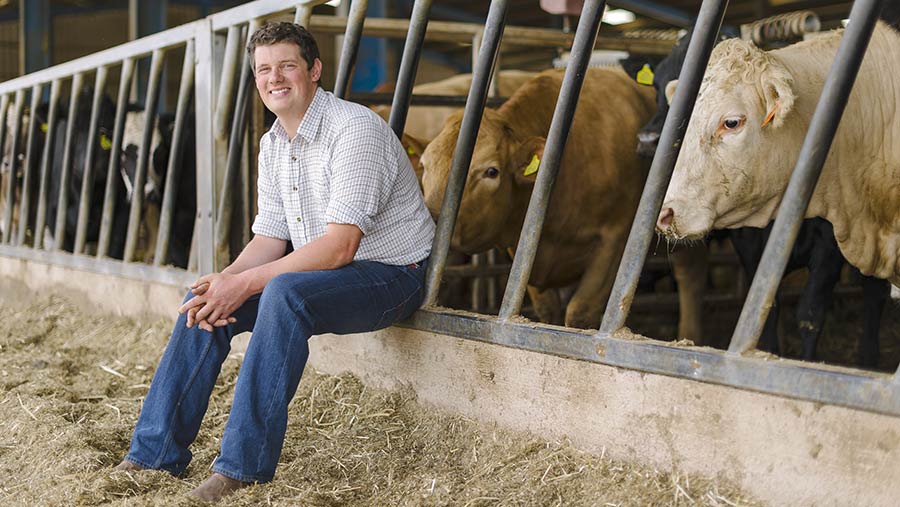 A huge amount has happened since my last column – we’ve taken another cut of grass, wholecropped the oats and combined all of the barley.

All has gone well and it’s good to have brimful grain bins and full silage clamps. Oh… and we have a new prime minister and a Defra minister who I’ve never heard of.

Two things have not changed, however. First, the beef price, which is now at its lowest level for five years, and second, the amount of bad press farming seems to be getting from the climate change camp and the noisy 1% of the population – the vegan tribe.

Recently, a school came to visit the farm (something I think many schools should do) and I was genuinely staggered and worried by how much the teaching staff had to learn about food production.

We don’t stand a chance in promoting the consumption of meat if the younger generation aren’t educated on the benefits of eating British-grown, British-reared food.

If we want sustainable agriculture, we need sustainable demand for our products, and in my opinion, that has to start through education in schools at a young age.

I really hope that once we are on the political straight and narrow, our government sees sense and makes food education a compulsory subject for primary and, perhaps, secondary schools.

It should be taught in a practical way that highlights our amazing welfare standards and our beautiful countryside, which wouldn’t exist if it wasn’t for our dedicated farmers.

The knock-on effect of food education in schools would be so positive for our industry. It would create demand for UK-produced food, a healthy diet and, hopefully, some much-needed pride from the public in what they eat.

New Zealand, Australia, France, Ireland and many other countries are bursting with pride for the food they produce – wouldn’t it be nice if the same attitude was adopted here, rather than the ever-increasing negativity?

Learn from the vegans

Maybe it’s time for the likes of the AHDB and NFU to invest in their own research to demonstrate the positives of eating meat.

Or, we could take an example from the vegan movement. Look how it has flourished in the past couple of years.

Fact for the day: The number of people who follow a vegan diet in the UK has increased fourfold to 600,000 in the past four years, according to the World Vegan Society.

Some clever marketing campaigns and a few celebs saying the right things at the right time and Bob’s your uncle. Specialist restaurants, shops and market stalls are cropping up left, right and centre.

We could learn from that: Invest in marketing, research and the odd Love Island finalist with the right attitude and we could have a revolution.

That would certainly help what I think is the underlying issue for beef – a slump in demand.