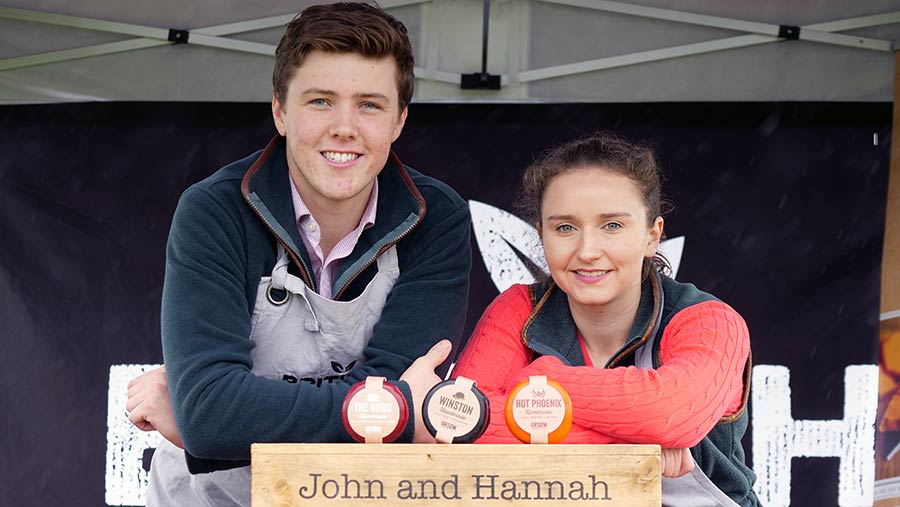 Last year, we spoke to Hannah Kinston and John Davies – two young farmers whose entrepreneurialism is fuelled by a passion to promote British farming.

We check in with them on National Young Farmers’ Week to find out how being Young Farmers Club (YFC) members helped them run a thriving business.

The couple, who are both members of Netherseal YFC in Derbyshire, developed a business idea to sell cheese bought from award-winning Cheshire cheesemaker Joseph Heler.

This venture helped them through university and is now big enough for them to take on full-time staff. In three years, they have grown to sell more cheese in a week than they did in their first year. Trading as British Food Box, their foodie farm enterprise has quadrupled in size.

See also: Ex-Kooks drummer-turned-herd manager on his love of farming and cheese

After successful show sales, the couple saw the potential to sell even more to raise funds to see them through university.

“The cheese was so popular, I kept going back for more and we then started selling to local farm shops, restaurants and pubs. We effectively became fine-food wholesalers,” explains Hannah.

“Farmers can chat to us about farming as we have seen the highs and low of it and understand what they’re going through. That’s what makes us different to other wholesalers,” says John.

“Quite a few farm shops are owned by farmers who have struggled with cashflow and have had to diversify. If you can help them, then you should. We’re not a greedy sales rep that’s just trying to fill the fridge and then run off. We want to help them succeed.”

Despite never selling to businesses before, Hannah believes their YFC experience has helped them grow the business. They met at YFC when they were 17 and both have held roles in their local club.

“YFC has really built up our confidence and skills. You experience teamwork through competitions and you meet so many people from across the country,” says Hannah.