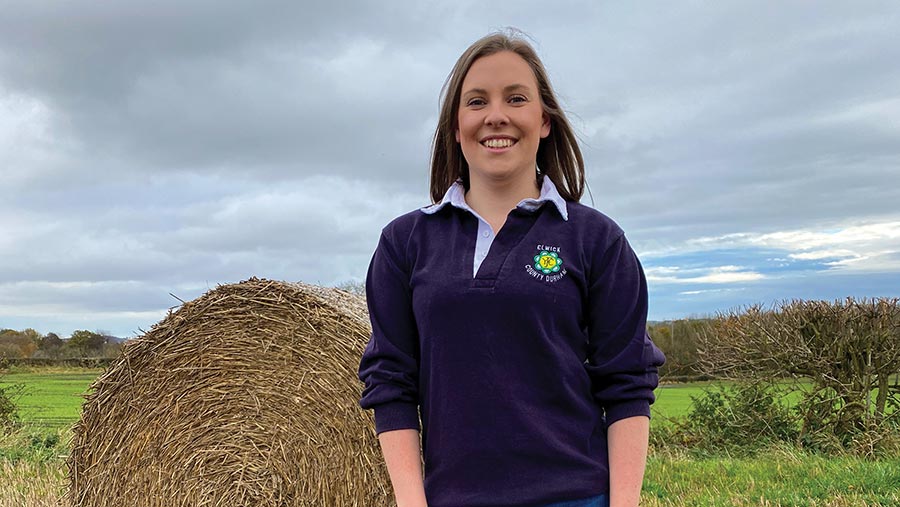 A 26-year-old from County Durham has been given the first-ever “Heart of YFC” Award, marking the culmination of National Young Farmers Week 2020.

Katie Sanderson from Elwick YFC was awarded the title, after more than 1,500 members across the country cast their vote.

It came at the end of a five-day programme of events, designed to raise awareness of the YFC movement and the work it does, to recognise members for their achievements during the Covid-19 pandemic, and to boost membership.

“I can’t believe it – I’m over the moon,” said Katie, who joined 13 years ago and is currently NFYFC’s competitions vice-chairman.

The judges who shortlisted Katie to the final three, who were then put to the public vote, said it was in no small part the result of her “fortitude and passion” that the small club of Elwick has survived.

She was praised for attracting new members and supporting them, while making sure the club was at the heart of its local rural community.

“We got down to the point where it was me and my sister and a couple of other members going to weekly meetings,” said Katie, a former winner of senior member of the year.

“The easiest option would have to say ‘Let’s just call it a day’, but there was no way I was going to let that happen. We battled on.”

Her efforts included launching a recruitment drive, going out into the village, to local events and to schools – “to get our name out there, to show what we do and highlight you don’t need to be a farmer to be a Young Farmer.”

Elwick’s roots date back to 1933 – and Katie’s grandfather was one of the first members.

“He would just be so proud to know I’ve done this today,” she said.

“To be able to play my part in carrying it on through the generations is amazing.”

Public speaking and cookery are just two of the activities she’s enjoyed, plus she takes great satisfaction from helping junior members develop their potential.

“I love everything about YFC. I’ve made friends up and down the country who will now be friends for life.”

Also reaching the final three in the inaugural Heart of YFC Award was Matt Frampton, country chairman of Beaminster in Dorset.

According to the judges, Matt’s commitment to YFC “never waivers” and, even after his diagnosis and treatment for testicular cancer, just before Christmas 2019, he still attended and led every county meeting.

“Matt faced an intensive nine-week period of chemotherapy after it was discovered the cancer had spread, but once again he remained active in YFC, attending all meetings with a smiling face,” said a NFYFC spokesperson.

Matt’s positive attitude inspired members of his county to launch a fundraising campaign, which raised more than £7,300 for Orchid – a charity that works to save lives from male cancer.

He is described as “approachable and always willing to listen, to learn and improve – and the best advocate for YFC’s values.

“With grace, courage and enthusiasm, Matt has shown the YFC community that when people support each other, the possibilities are endless.”

Also reaching the final three was Ben Goulding of Weston and Banwell Club in Somerset.

Although not coming from a farming background, Ben has “thrown himself into all that YFC has to offer”.

He volunteered to take on roles – starting with carnival secretary and rising to club chairman and county vice-chairman, among others.

Most recently, he was elected part of the Covid-19 committee to help manage the county operations during the pandemic.

“Mental wellbeing is important to Ben and he always looks out for others in the club and will act quickly to show support if someone is struggling with their mental health,” said a NFYFC spokesperson.