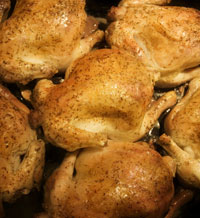 Cases of campylobacter have risen again while salmonella cases have fallen for the fourth year in a row, says an EU report.

Published by the European Food Safety Authority and the European Centre for Disease Prevention and Control, the Annual Community Zoonoses report showed that there were 200,507 cases of campylobacter in 2007. Most member states reported an increase in cases from 2006 to 2007.

In foodstuffs, the highest number of campylobacter positive samples was again reported in poultry meat with an average of 26%.

Salmonella was still the second most reported zoonosis with 151,995 confirmed cases in humans. But incidence of salmonella has continued to significantly decrease across the European Union for the past four years, which could be down to new rules.

Salmonella was frequently found in fresh poultrymeat, with on average 5.5% and 1.1% positive samples detected. Some member states reported 0.8% of table eggs to be positive for the disease.

New salmonella control programmes in poultry breeding flocks were introduced for the first time in 2007. Fifteen member states have already reported prevalence below the salmonella reduction target of 1% stated by the legislation.