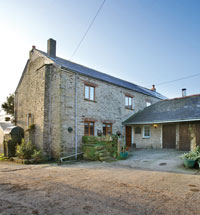 A Cornish dairy farmer is selling his 214-acre dairy farm overlooking Fowey to embark on a new career as a maths teacher.

David Palmer has put Leyonne Farm, at Golant, south Cornwall, on the market and is considering selling the 200-cow commercial black-and-white herd as part of the deal. Mr Palmer, whose family bought the farm five years ago, is preparing to take a university course and formal teacher training to begin his new career.

Mark Bromell of agent Kivells, which is handling the sale with local firm Luscombe Maye, said the excellent commercial dairy farm was most likely to be bought by a commercial farmer as a principal holding. “This is a commercial dairy holding which is extremely well-equipped. You could go in there tomorrow and start milking cows. It has an enormous collecting yard and excellent buildings which would credit a much bigger farm.”

The farm’s 20:40 Westfalia parlour is less than six years old and equipped with a fully-automated Fullwood feeding system. Mr Bromell said farm tracks were well laid and maintained. The commercial herd runs to 190 milkers calving all year round. The farm’s 1.2m litres of milk quota at 4.07% butterfat would be included in the sale, Mr Bromell added. The farm also supports 130 beef finishers as well as bulling and in-calf heifers for the dairy herd.

The farm lies in a sheltered spot on good quality, free-draining soils on the west side of the River Fowey valley, about two miles upstream from Fowey and Polruan. The average field size is considerable for south-west England, at about 10-12 acres.

There is a smart, modernised six-bedroom farmhouse with three ensuite bathrooms, from which Mr Palmer’s family have established a successful bed-and-breakfast business. This is a going concern and is also to be included in the sale.

Although a “perfect opportunity” for a commercial dairy farmer, it was possible that a non-farming buyer could be attracted due to the farm’s location near Fowey, Mr Bromell said.

Joint agents Kivells and Luscombe Maye are selling the farm as a whole with a guide of £1.75m.