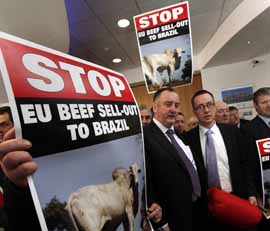 Trade talks between Europe and South America could drag on until the end of the year, according to EU sources.

The EU-Mercosur trade negotiations are unlikely to see any major progress until after the Argentinean elections towards the end of October, it has emerged.

Brussels sources have said that any moves to table offers for the amount of market access before this time would be “too sensitive”.

EU farm commissioner Dacian Ciolos has also been quoted in the Irish press as saying the talks have been delayed.

The commissioner was speaking to journalists during a tour to his home region of Transylvania in Romania where he briefed a number of European and agriculture correspondents on his CAP reform priorities.

Farm leaders have expressed grave concern about the outcome of the talks which they fear could seriously impact on European beef and poultry producers.

They are worried about imports increasing from countries like Brazil, Argentina, Uruguay and Paraguay which have lower environmental and welfare standards than in the EU.

The next round of negotiations is scheduled to take place in Brussels at the beginning of July (4-8).