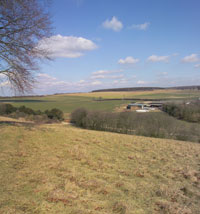 English farmland values fell by 5% in the last three months of 2008, according to figures from Knight Frank. But average farmland prices rose by 16% in 2008, the firm’s research reveals.

However, in a gloomy start to the New Year, the firm estimated agricultural land values could fall by a further 6% in 2009.

Knight Frank’s head of rural research, Andrew Shirley, said: “It would have been amazing if farmland had been able to buck the worsening economic climate that has affected all other property sectors. Values have now started to fall after rising rapidly in the first half of 2008 and briefly levelling off in the third quarter of the year.”

“We are predicting a further fall of about 6% during the year, but expect the farmland market to prove more resilient than residential or commercial property,” said Mr Shirley. “Despite an increase in volumes last year, the availability of land remains historically low and there is little evidence to suggest a flood of forced sales in 2009 that could pull prices down dramatically.

“Values rose sharply over the last year because there was not enough farmland available to satisfy the number of eager buyers. But that imbalance has now shifted, with the pool of active purchasers significantly reduced.”

But Knight Frank was prepared to be more bullish about figures for country houses, mainly because they had already experienced the worst of their price falls, he said. The firm’s analysis of country house values suggested that although they had lost 16% of their value in 2008, and a whopping 9% in the last three months of the year, further declines were likely to be more limited in 2009.

“It appears that the very top of the market remains resilient, with prices for houses worth more than £5m dropping by just under 10% compared with 17% for houses valued at less than £500,000. This reflects an underlying shortage of top-end country property.”

So-called “lifestyle” buyers of farms and land had been badly affected by the worsening economic situation and were likely to have less influence on the market in 2009, said Mr Shirley.

Knight Frank is continuing to market Manor Farm at Priors Marston, Warwickshire, at a significantly reduced asking price, said the firm’s Claire Duthie. The 794-acre farm, which came to the market in late summer 2008, has three cottages and a modern, four-bedroom farmhouse, all let on assured shorthold tenancies. There is 4500t of modern, on-floor grain storage and soils are mainly heavier clays. Knight Frank is seeking offers of more than £4.9m.