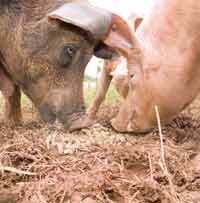 Canada faces losing 25% of its pig herd in one year, according to Ben Woolley, vice president of Sunterra Farms, speaking at JSR’s 20th Annual Conference, Nottingham .

With a herd of more than 1m pigs and mostly reliant on export markets, the country is in a vulnerable position.

“Because of poor markets we are expecting to lose 25% of the Canadian pig herd between 2008 and 2009. The USA and Japan are our two main exporters but, because of the H1N1 flu infection in Mexico and the USA there has also been a 40% drop in live exports,” he said.

However, Sunterra Farms, which owns and manages 8000 sows in Alberta and 5000 in Ontario and finishes 234,000 pigs in north-west Iowa and the rest in Alberta, positions itself to try to remove the impact of feed costs, poor exchange rates and disease.

“Finishing all pigs in the USA means we avoid getting discounted due to the exchange rate and working with a feed co-op means in nine years out of 10 we have taken advantage of lower feed costs,” he said.

However, finishing pigs in the USA has resulted in some problems. “In 2009 country-of-origin labelling legislation was implemented, meaning Canadian pigs slaughtered in the USA were heavily discounted. We challenged this and now USA packers are becoming more comfortable with handling pigs born and raised in Canada,” said Mr Woolley.

Managing the risks is the key to surviving tough times, says Mr Woolley. “Having clear strategies with purchasing ingredients and hedging sales and also making sure you have the resources to survive the volatility is vital.”