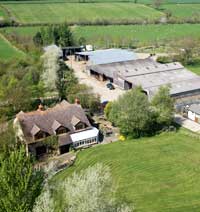 One of the country’s best organic farms has just been launched on the market near Rugby, Warwickshire.

Elmhurst Farm has been under organic management for about 30 years, and is now one of the Soil Association’s flagship demonstration farms. The 160-acre pasture and arable farm includes a modern five-bedroom farmhouse, with a farm shop and four offices. It also boasts a range of modern agricultural buildings covering 20,300sq ft.

The secluded woodland setting and excellent organic farmland would attract a diverse range of buyers, said agent Jeff Paybody at Howkins & Harrison. “I think it will appeal to the lifestyle purchaser; someone wanting to buy an organic farm; and neighbouring farmers alike. It looks like it will be very popular.”

The owners entered the land into organic conversion in 1990, and in 1998 they won the prestigious Loraine Award for Nature Conservation and Organic Farming. They also entered much of the land into stewardship and woodland schemes, improving the wildlife habitat and organic productivity. “It’s some of the best grassland I’ve seen this year,” said Mr Paybody. “It’s absolutely fantastic.”