Farming is used to lean times, but the collapse of the house-building sector in the UK has been dramatic even by agriculture’s rollercoaster standards.

Taylor Wimpey and Barratt, two of the country’s biggest new home developers, have seen their shares fall more than 80% in the past 12 months. The reasons are not complicated. The uncertainty and lack of funds caused by the global credit crunch means lenders aren’t lending, would-be buyers aren’t buying and subsequently there is a glut of houses, either built or in the pipeline, that nobody can afford.

Figures from the National House-Building Council show 15% fewer new homes were completed this year in the three months to the end of July than in 2007. More worrying for the industry, however, is that applications for future construction fell almost 50% in the same period to only 28,000 houses.

Unsurprisingly, this downturn has had a knock-on effect on the value of land where these houses were due to be built. Redrow, another major house builder, announced a 45% fall in its pre-tax profits for the year to 30 June. Taking into account a £260m write-down in the value of its land holding, the company actually plummeted £194m into the red.

Knight Frank’s development land index for the 12 months to the end of September shows that the value of Greenfield land, with planning permission, has fallen on average by 26% across the country overall (see table).

Of course, the varied nature of development land and the houses that get built on it means values are spread even more widely than for farmland. One site that was valued at £1.1m/acre earlier this year is now only worth £440,000/acre.

All this sounds bad news for any farmers with land they are hoping to sell for development. Who, after all, would want to spend money in the midst of an economic crisis that Chancellor Alistair Darling recently, and controversially, described as the worst in 60 years?

Actually, quite a few. While nobody wants to risk paying millions of pounds for land that has or is about to receive planning permission, there are plenty of buyers trying to secure land for developments that will be built in five to 10 years’ time once the market has picked up again. The daily flood of bad news and woeful economic data does not change the government’s longer-term ambition to increase homeownership in the UK and build 3m new houses by 2020.

As part of last year’s Housing Green Paper – Homes for the future: More affordable, more sustainable – the onus will be on local councils to identify enough land to deliver the homes needed in their area over the next 15 years.

Buyers include private speculative investors with property experience, specialist land promoters and even a few medium-sized housebuilders who aren’t facing as challenging times as the PLC housebuilders.

The locations they are interested in tend to be those targeted for increased growth as part of the government’s Regional Spatial Strategy and identified under Local Development Frameworks. 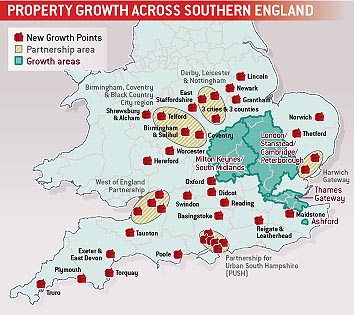 Some of these are well known, such as the Thames Gateway, the M5 corridor and around Milton Keynes, but there are also a number of additional “New Growth Points” (see map) across south and central England, which have been designated for almost 500,000 new homes by 2016.

Details can be found at http://tiny.cc/houses253.

Because of the costs and risks associated with developing residential sites, especially in the current climate, sites from 50 acres and ideally more than 100 acres are the most sought after. Smaller sites in villages, where a need for affordable housing has been identified and the planning process could be fast tracked under the government’s rural exception scheme could also be of interest, although the returns will be much lower than for private development.

In general, farmers selling land with a development horizon of five to 10 years could expect up to £20,000/acre for their land, plus a 30-40% share of the increase in value once planning consent is achieved. This is known as an uplift or clawback payment and could be anywhere up to £1m/acre.

However, the uplift payment is usually net of costs and before signing an agreement it is important for the seller to be aware of what these include. They could, for example, cover potentially expensive infrastructure costs, any Section 106 conditions, which might include facilities for the local community and any affordable housing requirements specified by the local authority.

It is also worth defining how the land will be valued and making sure the agreement includes an “equalisation” clause. This means that if the potential development is based on land owned by a number of parties they will all share in the uplift even if some plots are not developed as heavily.

If the correct advice is followed and the most suitable partners involved there is the potential for a welcome windfall for some in the not-too-distant future.