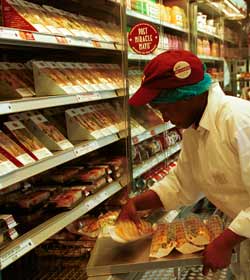 Fresh sandwich specialist Pret a Manger has been forced to change its website admitting that it uses imported Brazilian chicken in its sandwiches.

It follows a Daily Telegraph investigation which revealed that the chain was selling chicken as “fresh” despite being shipped frozen from Brazil more than 6000 miles away.

In its defence, the sandwich chain claimed that it used Brazilian chicken on welfare grounds, claiming that it has a better life, enjoying natural light and open-sided barns that allow better ventilation.

It said: “Is it better to buy ‘open barn’ chicken from Brazil where the good weather and traditional farming methods mean birds have plenty of sunshine and fresh air, or should we buy from intensive local farms in the UK where the chickens have no natural light?

“Or should we double the cost of the chicken sandwich and go for UK-supplied organic, free-range chicken? This would be a great option but past experience tells us that our customers can’t afford to pay so much more for a chicken sandwich.”

The findings prompted the newspaper to launch a campaign for better labelling. It has called for explanations of where products are processed and where their ingredients come from.