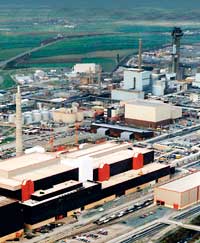 The government has sold 470 acres of land at Sellafield, Cumbria, for £70m to a consortium of French, Spanish and British companies aiming to build a new nuclear power station.

The land adjoins the existing nuclear plant, established in the 1950s.

It is the third site sold this year by the Nuclear Decommissioning Authority for new nuclear stations. The other two sites at Oldbury-on-Severn, Gloucestershire, and Wylfa, Anglesey, raised more than £380m.