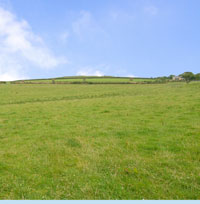 Blagrove Farm, a 177-acre dairy farm at East Worlington near Crediton in Devon is guided at £1.35m and Trekennard Farm, a 204-acre livestock unit at Poundstock, near Bude, Cornwall, is to be offered in 10 lots.

Blagrove Farm includes a recently built four-bedroom farmhouse, subject to an agricultural occupancy condition. There are over 28,000sq ft of cubicle sheds and other buildings and a recently replaced 10:20 herringbone parlour and bulk milk tank.

James Baker of Strutt & Parker said it was a straightforward sale, with the vendor looking to release some capital to buy some land, nearer to their main holding, which had recently become available.

The land, mostly in permanent pasture, has been used mainly by the vendors to produce “an abundance” of silage. Mr Baker said the grass did not burn off during the summer months and the holding offered an ideal chance for an existing dairy farmer or a newcomer to the dairy sector.

Meanwhile, Trekennard Farm runs to 204 acres of organic land and has supported a beef and sheep enterprise. “There is a very nice, traditional Cornish farmhouse with seven bedrooms, which can be subdivided in two. One half has been previously let as holiday accommodation,” said Mr Baker.

While there were few buildings, the farm had a series of covered yards and planning permission to convert a roundhouse barn into a five-bedroom house with no agriculrual tie, Mr Baker added.

Trekennard Farm is being sold in 10 lots, due to plenty of interest from neighbouring farmers or landowners, Mr Baker said. “We don’t yet have a guide price for the whole, but the land is being placed at £3750-4250/acre.”

Paddocks in individual lots range from two acres up to a block of 105 acres.