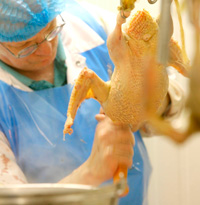 The US government has formally asked the World Trade Organisation to intervene in the long dispute with the EU over its poultry import ban.

It wants the WTO to set up a dispute settlement panel to review whether the EU’s ban on the import and marketing of poultrymeat and poultrymeat products processed with chlorinated water is illegal.

This EU ban was put in place 10 years ago due to health concerns about antimicrobial agents, such as chlorinated water, used by American processors to remove any bacterial contamination of carcasses. Earlier this year, EU farm ministers voted unanimously to keep the ban.

It a statement, the US Trade Representative Office spokeswoman Nefeterius McPherson said: “US poultrymeat subject to the EU ban is safe. There is no scientific evidence that the use of pathogen reduction treatments pose any health risk to consumers.

“We regret that formal WTO consultations and significant US engagement over many years have not resulted in the lifting of the EU’s ban. However, we feel that we must move forward with WTO dispute settlement panel proceedings at this time.”