From an intensive indoor farrow-to-finish system and a new start-up, to an outdoor low stocking density high welfare system, all three finalists were at the top of their game producing pigs with top performance and care.

North Farm Livestock, owned by brothers Michael and Ian Baker, may be a large-scale, high-welfare, free-range operation producing 1,800 finished pigs a week, but through its attention to detail it has production figures that would be envied by many indoor units.

The 763ha part-owned, part-tenanted farm has 3,200 sows spread across three breeding herds and has 15 finishing sites producing 1,800 pigs a week at 105kgs to Tulip, mainly for Waitrose.

This means after their sixth parity all sows are culled and a full depopulation and repopulation takes place.

Michael says: “The health of incoming pigs is key to driving healthy pigs throughout the entire system.”

The herd has a low antibiotic use of 4mg/kg with many pigs not needing any antibiotics, and below average pre-weaning mortality figures of 8.5% and 3.17% in the finishing herd.

Low stress levels across both the breeding and finishing herds aid herd health.

The dedicated gilt mating units are set out the same as the breeding herd, in paddocks, which means when gilts are moved onto one of the breeding units there is no major change.

Stocking densities are low on the finishing sites at 50sq m a pig, compared to the RSPCA minimum standards of 12sq m a pig.

They leave a space between each finishing paddock which limits contact between batches of pigs, improves biosecurity and helps reduce antibiotic use.

They have also taken on extra land housing no pigs to create a barrier between herds.

Tents on the finishing site have been tweaked to aid pig health with a higher than average roof pitch aiding air flow. In the winter they create a kennel inside the tent using tarpaulin to keep the pigs warm.

Staff
There’s no doubt the high health and production of this herd is in part due to the attention to detail from the 38-strong team at North Farm Livestock.

Ian’s background as national head of agri-food for Barclays and Michael’s knowledge of pigs creates the perfect match.

The brothers took on the business in a management buyout in 2012. Since then they have created dedicated department heads and deputy managers operating the breeding, finishing and logistics team.

They have introduced a profit share scheme instead of paying a Christmas bonus.

About 10% of the yearly profits are split between the staff and the amount they receive is dependent on the time they have worked on the farm, their job and salary. They also hold team away days.

Ian and Michael also work closely with their 15 landlords and have long-term relationships which are necessary for an area where competition for land is high.

They keep stocking densities low to keep ground cover and always subsoil and cultivate each site to how it was.

The future
Future plans include increasing finishing numbers to 2,500 pigs a week from August 2019 and increasing the breeding herd to five herds as the number of gilts is increased.

The duo are also looking at diversifying into some leisure activity and ideas include high-end glamping/accommodation or possibly a vineyard.

Staff are integral to this high-welfare, free-range pig operation. Ian and Michael complement each other in their abilities and their team’s focus on high health ensures it has production comparable to indoor units.

What the judges liked
• Good relationship with landlords and with buyer Tulip
• Excellent staff management with career progression, staff profit share scheme and away days.
• Recruit people for specific jobs. For example, in the logistics team they are responsible for managing the sites, setting up tents and paddocks. They have recruited dedicated electricians and people from the building trade.
• Single parity herds and attention to detail driving excellent herd health and performance comparable to that of indoor units 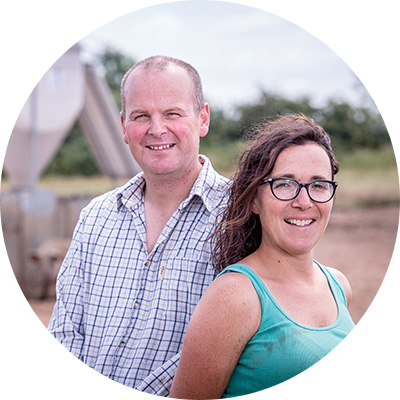 If there’s one couple who know what they want and will achieve it, it is Lee and Geraldine Chafer.

Sheer hard work and determination has seen them turn an initial £10,000 investment five years ago into a profitable and thriving 300-sow farrow to finish unit.

Their initial investment was in a 1,200-sow outdoor herd producing weaners for Tulip.

However, being tied into a strict contract and with a 90-minute commute each way from the farm, the couple decided to sell it and establish their own outdoor sow herd.

In 2018 they set-up a 300-sow outdoor herd at Grange Farm, a 28ha farm they started renting back in 2016. They built an additional 1,600 weaner spaces to finish all the pigs themselves.

Management
The five-week batch farrowing system has been designed with minimal staff needs in mind. Currently, only Lee and Geraldine work on the farm, with some relief help at busy periods.

All dry sows are fed with Electronic Sow Feeders (ESF), meaning they only need to go into the field once a week to feed.

Many outdoor units have failed to get ESF feeders to work, however, the commitment to training gilts to use them means they work well here.

Lee says: “The theory of ESF feeders are great. It means you are not driving a tractor around and disturbing the land, it manages their weight as they are fed a specific ration, and it saves time as you only have to fill the feeder up once every 7-10 days.”

All gilts and sows are EID tagged so they can be individually fed using the ESF feeders. Lactating sows are fed using ad-lib hoppers in individual paddocks that only have to be filled every two weeks.

The sows are housed in plastic, spherical pig arcs that are designed to outlast wooden and metal huts, and their spherical shape makes them easier to clean.

Production
When the pair established the herd, they opted for the highly prolific Genesus breed line which is a Large White cross Landrace.

Growth rates in the finishing herd are phenomenal. Piglets are growing 700g a day from weaning until 45kgs and their growth ability means they are selling pigs at 14 weeks weaned at 110kgs deadweight.

Feed conversion in the finishing herd stands at 2.24 and mortality about just 2%.

Their prolificacy also means they have high born alive figures with some litters containing up to 15 piglets. Conception rates and farrowing rates are also high, at between 96-100%.

All pigs are finished inside on straw and are sold as RSPCA approved outdoor bred to Karro. Their contract with Karro means all pigs must have entire tails and no teeth clipping is allowed.

Each finishing pig has more than 1m space a pig, which is above RSPCA Freedom Food standards of 0.8m per finished pig.

The future
Although the business is still in its infancy, the couple are already looking at how to take it forward. In the next two-to-four years, they aim to be wholesaling their own product.

Lee says: “We haven’t got a plan in place yet, but we want to be adding value to our product and not have all our eggs in one basket.”

With a lot of focus, hard work and determination, husband-and-wife team Lee and Geraldine Chafer have been able to establish a thriving and profitable pig business with just a £10,000 investment. Their genetic line means they have some phenomenal production figures. 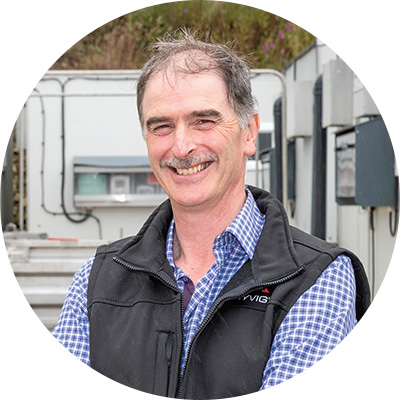 The Youngs’ dedication to pigs and ensuring there is a viable enterprise for future generations has seen more than a £1.2m invested into a new farm set-up.

Until 2011, the farm was fattening pigs bought from multiple sources.

However, when son Marc wanted to join the business after finishing college, Gary acquired a local rundown birth to bacon pig unit so he could establish a farrow to finish enterprise.

Gary now runs the high-health/high-performing breeding sow farrow to finish herd along with his children Marc, Judith and Gemma.

Technical production
A strategic programme to rebuild and refurbish the buildings on both the birth to bacon unit and the home finishing unit has cost more than £1.2m.

They are now farrowing 680 sows and finishing more than 20,000 pigs a year through the pig marketing group Progressive Lean pigs who have a good relationship with Karro and Cranswick.

The Youngs also supply a local butcher in the south of Ireland. Pigs are sold at between 105-110kg deadweight.

Their highly prolific Danbred genetics means production is high with litter sizes often in excess of 15 and weaned pigs per litter at 12.7. Daily liveweight gains in the finishers are averaging about 1010g a day with mortality at about 2% in the finishers.

Technology
Pigs are mixed at weaning and remain in the same group until finishing.

In the finishing pens, pigs are housed in group sizes of 460. Three state-of-the-art automatic pig sorters in the finishing house are helping reduce labour and further improve efficiency.

The plan is to add another two in the future. This means pigs of different sizes and different sex can all be housed in one large pen.

The sorter weighs the pigs and takes an image of their conformation to determine which diet they should be fed. This means pigs are fed diets specific to their needs and growth. Gary says: “The little pigs do better as they are fed more accurately.”

The pig sorter can automatically shed off animals ready for finishing. Gary says: “We can set it to run overnight so it sheds pigs of a certain weight and in the morning, they are all ready to be loaded.

It cost £34,000, but it has halved our loading time, improved production and means we hit target weights,” he says.

Pigs are fed on a wet phase feeding system introduced at 10kgs. This means the diet changes gradually over time depending on their growth curve.

The family mill and mix their own feed allowing them to meet the exact nutritional requirements of the pigs at all stages of their growth and provides flexibility and consistency.

The future
The family also employs four other people on the pig enterprise. To ease workload the family is looking to invest in a robotic pressure washer, freeing  more time for stockmanship.

Staff are on performance related pay. They are given in-house training as well as attending external training courses.

In addition to their 225KW wind turbine, which has greatly reduced electricity costs and added a new income source, they are looking at installing a slurry cooling system to generate energy and further reduce ammonia emissions.

Ensuring there is a business for future generations has seen the pig enterprise at Grove Road turned on its head. Family is at the heart of this business with new technology being adopted to drive forward an efficient and profitable future.

“Recognising the innovation and commitment of pig producers is more important than ever in the current financial climate. The winner of this award will be a pig producer who can demonstrate real change in the business in recent years.”