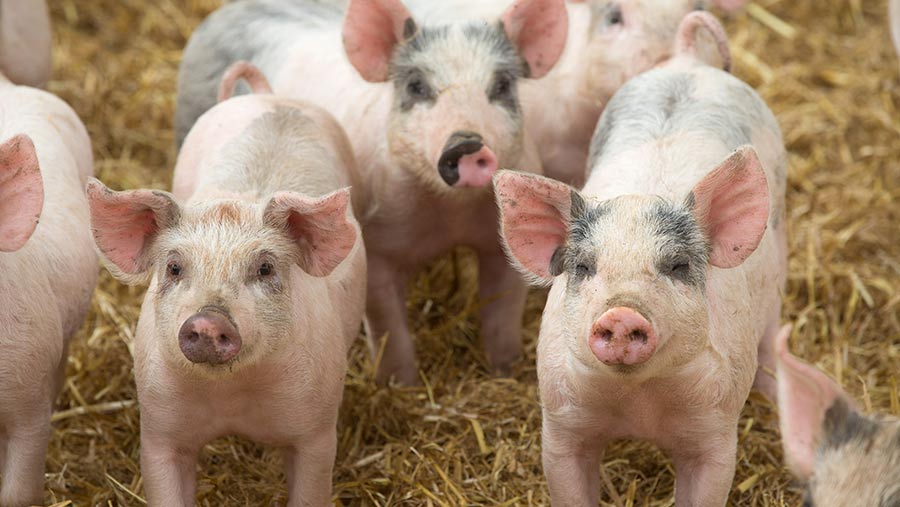 Pig producers and industry leaders are positive about the future, with opportunities Brexit might bring and export possibilities high on the agenda.

At the Pig and Poultry Fair on Tuesday (15 May), a show of hands at the standing-room-only seminar on “Preparing for the road ahead” echoed the optimistic results of the pre-event survey.

The survey results suggested that 53% of pig producers were unsure how Brexit would affect their business, with 47% stating it would be a positive move.

No survey respondents said they thought it would be bad for their business and, while many attendees at the fair were cautious about the future, few were negative about the impact of Brexit.

Good year for the pig sector

This comes after a “pretty good year” for the industry, according to Mick Sloyan, strategy adviser for AHDB Pork.

“After the pain of the back end of 2015 and much of 2016, the pig market recovered and average net margins, based on a full economic cost, returned to the black in 2017,” he said.

“Although the market price weakened from the peak of 165p/kg (SPP) in June, average margins remain in the black into 2018. “

He attributed the position to a combination of relatively tight supplies in the UK and Europe with an encouraging lift in demand and the weakness of sterling.

“While the rest of the EU struggled exporting to markets such as China, UK exporters managed to expand business. By the end of 2017 we had reached a position where the value of pork exports to China was almost twice the value of Scotch whisky exports,” he said.

Mr Sloyan told delegates at the event that exports to Greater China, including Hong Kong, exceeded £100m last year and, overall, exports of pork, offal, and processed products such as sausages and bacon, were worth £470m in 2017.

Brexit and the pig sector

Ed Barker, senior policy adviser at the National Pig Association (NPA), said the pig industry could benefit from Brexit as much, if not more, than other sectors.

He reckoned that the EU trade deal would come first, which he saw as positive for the pig sector in terms of the cull sow market and availability of labour.

And while China is clearly a key trade partner, he hinted at a possible agreement with Australasia.

“It is possible that an Australia, New Zealand trade deal could come about. What that will mean for the lamb sector I don’t know.”

“I think every decision from now on will come back to ‘well, can it be done with an open Irish border?’.”

Considerations for the road ahead

Andrew Saunders, director of agriculture at Tulip, spoke about preparing for what he called “the bumpy road” ahead. His main points fell into five categories:

Mr Saunders said exports were key, adding that more than half of the additional pigmeat production in the past 10 years has been exported.

“Year on year, imports have effectively gone down and exports have gone up,” he said, with it largely being loins and legs that are coming into the country.

Beyond Europe, China and the USA remain key markets, but other markets in Africa, the Middle East and Asia may also present opportunities.

“We’ll only get access to those markets if we are competitive and efficient,” he said.

Mr Saunders said it was important to keep focusing on high welfare standards, but not to the extent that the industry “shoots itself in the foot” and opens the door to cheaper imports.

“We need to build on where we are with transparency in our supply chain, selling the positive story we have,” he said, highlighting that technology will be important to this.

“As an industry, we are very reliant on imports of raw materials. The more we can source materials at home, the better,” he said, citing protein sources as a place to start.

“Post-Brexit might throw a risk to our health status,” Mr Saunders warned, as every year disease seems to be moving nearer. “That health status is the thing that keeps our exports market open.”

He said the whole industry needed to invest in biosecurity to maintain high-health herds and keep export opportunities for the sector high.

The reliance on a non-UK labour force posed a risk to the pig and the processing industries in the face of events like Brexit, said Mr Saunders, and farmers have to find ways to overcome this.

One such way, he stressed, was finding ways of attracting more young people to the industry.