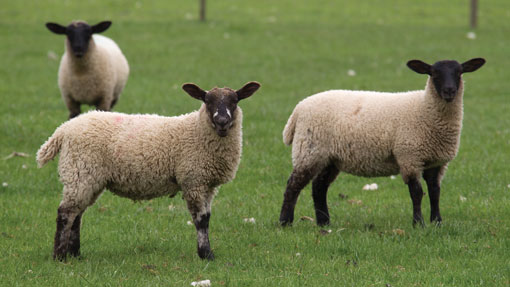 Sheep farmers are being encouraged to carry out lamb faecal egg counts after a challenging start to the grazing season.

This year conditions have been extremely variable around the country and worm burdens have been anything but predictable, so sampling is key, says Lesley Stubbings, independent sheep consultant.

“Normally, once the nematodirus risk has passed, a large proportion of the worms picked up by lambs are ones that have hatched from eggs shed by ewes after lambing.

However, the mild winter means a lot of worms survived on pasture – ready and waiting for lambs to eat them,” she says.

See also: Whole of UK at risk from nematodirus

Ms Stubbings has seen several farmers caught out after using a white drench for nematodirus.

Normally, this would be fine, because although other worms are likely to be resistant to the white drench, they are not around at the same time as nematodirus.

But the tables have turned this year and any farmers who feel their lambs aren’t thriving following the first drench may find this is the reason and should to talk to their vet or adviser, she adds.

With many farmers having now completed first cuts of silage to control the surge in grass growth, it could be a good time to think about using these areas to reduce the worm challenge for lambs.

“If these pastures have not carried sheep so far this year they will have a much lower worm burden. Faecal egg counts (FECs) will show if treatment is necessary and if so, leave lambs on the dirty pasture for four to five days after treating to make sure they don’t take resistant worms only with them.

“It’s all about taking a mixed population with you. Freshly wormed lambs will likely only carry resistant worms and we need to dilute these among the sensitive ones for treatments to remain effective.

“While this goes against the grain for many of us, it’s essential if we want to keep our wormers working in the future,” she says.

To reduce selection for resistance to anthelmintics when moving lambs to grazing pastures with a low level of challenge, either of these key steps can be taken:

Ms Stubbings advises farmers selling lambs in the next couple of weeks to go for the second option.

“It’s all about having the confidence to leave the fastest growing lambs untreated. But it also makes financial sense not to treat these if you’ll be drawing in the next couple of weeks, to avoid keeping them through the withdrawal period and incurring the extra cost of wormer.”

FECs post treatment are equally important to confirm product efficacy. Surviving worms could indicate resistance is present as not all worms are being killed and will result in reduced lamb performance. Post-treatment sample timing varies according to the product used, so speak to your vet or adviser, she adds.

“Farmers really need to know which wormers will work on their farm to make sure they are getting good growth rates. Taking steps to slow the progression of resistance by using wormers carefully is vital for future flock health.”