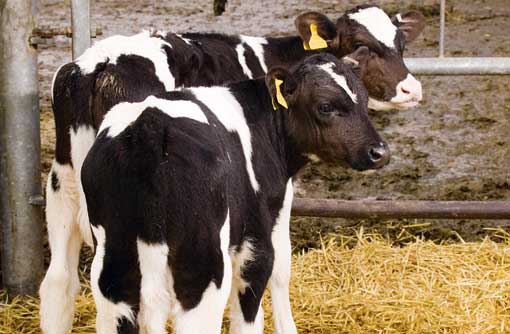 “Recommendations are for calves to be kept individually in hutches for one week after weaning in order to reduce stress, and subsequently minimise the spread of infectious disease and achieve a stronger calf,” he told farmers at Volac’s heifer management conference staged in Ayr.

“However, we have recently found grouping calves earlier actually encouraged solid feed intakes simply because of the improved social interaction, they followed each other to the feed trough. Consequently, these calves demonstrated growth and health benefits.”

The trial staged at the Catalan Institution for Research and Advanced Studies (ICREA) featured 320 Holstein Friesian calves which had been individually housed during their first eight weeks. They were step weaned at seven weeks, and were fed two litres of milk replacer for the final one week before weaning at eight weeks.

At weaning, half of the calves were immediately housed in same age groups of eight, while the other half spent an additional six days in individual housing and were introduced to group housing at 62 days of age.

The calves group housed immediately at weaning ate 50% more solid feed than the isolated calves and recorded an overall clear advantage; they had fewer respiratory disease relapses and ultimately significantly higher performance compared with the calves that were individually housed for a further week (see table).

The trial results were reinforced with a second trial with 240 calves, however milk replacer was fed twice daily until 49 days, followed by two litres fed once a day until weaning at 70 days. Half of the calves were group housed at the start of step weaning at 49 days, while the other half were individually housed until 56 days.

The calves group housed at 49 days ate an average 0.22kg per head per day more of solid feed over the 11 week trial period compared with those individually housed until 56 days. Furthermore, these faster growing calves had a lower number of respiratory cases than those grouped at 56 days of age.

“Calves are social animals and they get stressed if they can’t cope with the environment. These research findings have demonstrated how they are better able to adjust,” said Dr Bach.

“Moving calves from individual hutches to groups immediately at weaning is preferable to waiting an additional one week.

“Ultimately, moving calves earlier will lead to a surplus number of hutches. There will also be labour savings to be made as calves are easier to handle in groups.”