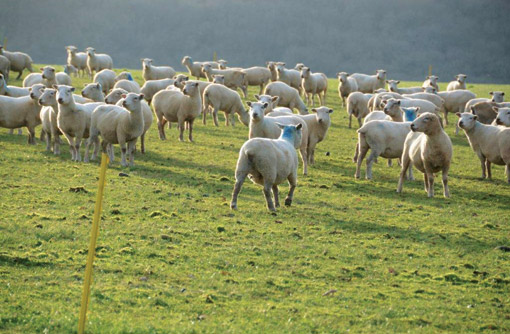 Grass growth may be minimal over the winter months, but grazing at high intensity and in a controlled fashion over winter could cut feed costs and increase the productivity of grass the following spring.

A: Wintering ewes mainly on grass is feasible and low cost on favoured farms in south-west England, but requires free draining soils, and an average winter for grass growth.

In more northern locations and at altitude more supplementation will be needed. Budget 10 ten days (10% of the winter) full feed when ewes are off the rotation and be prepared for housing at lambing if little or no winter grass grows.

How much grass do ewes need?

Condition score 3+ ewes need about a kilo a day of grass dry matter up to scanning, allowing them to lose half a condition score.

Add 10% for prolific Mule ewes. Starting the rotation at day 21 after tupping and scanning at day 76 means 55 days on this maintenance diet. On this ration ewes leave 900kg/ha of DM on the pasture.

If you have 900 ewes then they get 1ha a day, if 450 ewes they get 0.5ha – just over an acre, below 300 ewes it’s probably more sensible to work with two-day shifts as paddocks get too small.

After scanning ewe intake requirements rise from 1.5-2% of bodyweight and you need to allow about 1.5kg of DM a ewe a day and leave 1,200kg/ha of DM as a residual.

Close to lambing when grass is growing singles can be grazed two days behind the multiples to keep condition off them.

Can any ewes by grazed on this system?

Most UK ewe maternal breeds are suitable for the system.

Does grazing at high stocking density not damage the grass?

High stocking density, despite the short-term trampling damage, soon results in grass recovery if the grazing duration is short, weather not ridiculously wet, and the recovery period long.

When ewes, however, are stocked for long grazing periods in winter the opposite occurs, they graze and poach for longer periods causing significant damage, nibbling off precious regrowth and stunting recovery.

How many grazing cells and land area will I need?

This together with regrowth of up to 10kg/ha of DM a day in favourable areas of south-west England allows an outdoor lambing (April-May) with very little need for supplementary concentrates or forage.

How long can I graze for?

Where winter grass growth is 0-5kg/ha of DM, grass can be grazed until it runs out with supplementation of concentrates fed at grass for a fortnight before ewes are housed for lambing.

On either system plans have to be in hand to take sheep off the rotation if heavy snow or flooding occurs.

Is it expensive to set up?

AGW sounds like a lot of expense and work but it’s not. A small portable water trough on winter grass meets farm assurance purposes and will suffice as sheep take no water on grass only diets at 15% dry matter.

A mechanised electric fencing system costs about £3 a ewe to buy, lasts for years and is easy to use.

How much can I reduce my feed costs by?

The reduction in feed costs from grass-based diets was estimated in trials last year at about £15-18 a ewe compared with housed systems in favoured grass growing areas.

Savings will be considerably less on farms that can graze for part of the winter only. Recent NZ studies show four-day shifts work just as well over there but this has not been tried in the UK yet.

Dorset sheep producer Mike Miller is one farmer who can vouch by the benefits of all-grass wintering.

It may not be a term that is familiar to many, but the New Zealand concept is based on cell grazing grass where sheep are managed at high stocking densities and moved frequently through electric fenced paddocks.

He was already outwintering his sheep all year previously, but he was getting to February and running out of grass and haylage.

Setting up the system

So working with EBLEX and John Vipond of SAC Consulting, Mr Miller set up his system. Fields were shut up from mid-September onwards by using electric fencing. The plan was to start grazing sheep in mid-December with a grass wedge of 2,900kg/ha of DM.

Any ewes with condition scores too low were pulled out of the system, leaving 780 Mules and Romneys going into the all-grass wintering system.

“We had about 100 acres and 780 ewes were moved daily and grazed on about an acre a day.” Mr Miller also had a sacrifice paddock that could be used if there were any problems such as snow on the ground, so sheep could be supplementary fed without damaging the main grazing paddocks.

Mr Miller says through to scanning ewes were on a set amount of grass, but after scanning singles and twin bearing ewes were split with twins receiving an increased daily allowance. The aim is to maintain a level condition score throughout winter of about 3.

As a result of all grass wintering Mr Miller has seen several benefits. “Not only have we managed to keep ewes in a good condition and seen a reduction in prolapses in the Romneys, the pasture quality has also improved as the dung and urine is spread out right from the top of the strip to the bottom. It has also helped reduce feed costs and the ration quality is kept constant for the ewes,” he says.

The health and welfare of the ewes were also maintained despite being so heavily stocked. Mr Miller monitored faecal egg counts to check there weren’t going to be any problems and eggs counts didn’t go up.

However, he stresses the importance of soil testing for mineral and trace element status. “It’s vital you know your soil status and trace elements. We did conduct soil tests and tissue and blood samples as we have done bolus trials on farm before. This allowed us to make a informed decision as to whether we needed to supplement.

“If you have a deficiency it would only be exacerbated because of intensive grazing, so it’s vital to know what the grass is offering.”

Mr Miller says the system has forced a changed in his thinking. “It made me talk about grass in dry matter terms instead of just talking about a field of grass. All-grass wintering is certainly a better way of rationing feed stocks as you know what you have got before you go in to the winter and you can ration effectively before feeding it all,” he says.