Last weekend’s inaugural English Winter Fair, the event which has replaced the National Primestock Show in the winter show calendar, was hailed a success by both organisers and exhibitors alike with strong crowds thronging the Staffordshire County Showground over the two days.

A change in judging format saw all championships judged on the event’s second day, meaning both sheep and beef championship judging took place in front of packed ringsides. And the crowds that clamoured at the side of the sheep ring weren’t disappointed by the quality on offer.

But while there was undoubtedly strength in depth, it was lambs from one flock which dominated proceedings, taking both the overall champion and reserve tickets. Andrew Bishop from Gloucestershire has long been a man to beat in primestock showing, but this show proved his most consistent yet, with his purebred Texel pair taking the championship and his Beltex duo the reserve honours.

His top pair tipped the scales at a combined weight of 94kg and are by a homebred Beltex tup which is registered with the Texel Society. The reserve entry, meanwhile, weighed a total of 92kg and are by a Beltex tup bred in Mr Bishop’s father’s noted primestock-sire-producing Luggsmill flock. 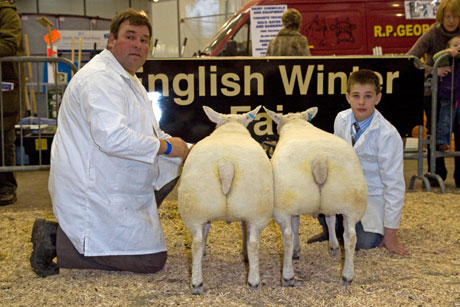 Champion and reserve sheep were Andrew Bishop’s Texel and Beltex

Judge David Prince told Farmers Weekly he’d picked the supreme pair from early on in the competition, as they were the finest matching pair in the show. “There were plenty of good lambs here, but too often one in the pairings didn’t quite match the other.”

In the lamb carcass competition it was the turn of the Beltex breed to reign supreme, with a 23.4kg entry from Christine Williams and Paul Tippets, Shifnal, Shropshire, taking the championship award for their 50-ewe flock. Standing reserve was a Dutch Texel-sired 21.3kg carcass from Owen and Ann Beresford, Ashbourne, Derbyshire.

In the cattle lines it was a British Blue-dominated day, both the champion and reserve prizes going to heifers by Blue sires. Taking top honours and more than £2500 in prize money was Colin and Wendy Philips’ October 2007-born entry Charisma.

Bred by Wendy Morgan and Trevor Price, Charisma was bought by Mr and Mrs Philips at Brecon in February for £950 and has had only one previous show outing, taking the championship at Llanafan Show. Charisma weighed 535kg on the day and was praised by joint overall judge John Maycock for her excellent cover and deep loin. “She was a winner from the moment I handled her, an incredibly well balanced beast with just the right amount of finish on her for the butcher trade.” 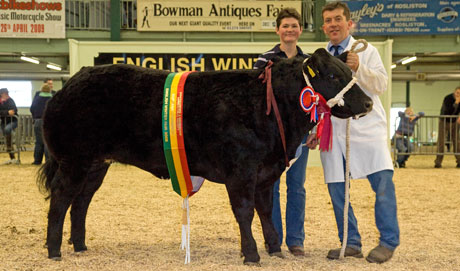 Taking the reserve spot were Phil and Sharon Sellers’, Derbyshire, with another British Blue heifer, Limited Edition. This one cost the Sellers £2500 from Ruthin in the spring. Having already taken the Countryside Live title last month, Limited Edition now heads for the Royal Highland Winter Fair and the Royal Smithfield Christmas Fair before returning home for breeding.

The show’s beef carcass competition was hotly fought, and with £3000 up for grabs it was understandable. But pipping everyone else to the cash were John and Denise Davies of Clifon, Rugby, with their Limousin cross Bazadaise steer. This was the couple’s first entry in the carcass competition. Taking second spot was regular exhibitor Frank Page with a British Blue-sired heifer.

Among the event’s pig classes the championship was taken by Richard Brown, Preston, with his Large White pair, while reserve was Malcolm Hick’s Gloucester Old Spots x Pietrain duo.