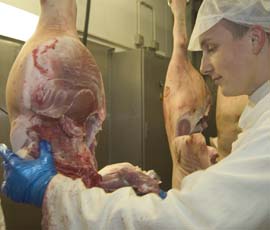 Farmers are being urged to make their feelings known about plans to pass meat control costs back to producers and processors.

Food safety officials are holding a series of regional public meetings to discuss the proposal ahead of a national open meeting on 25 May.

Comments made at the meetings will be included in the evidence considered by agency board members as part of its decision-making process. It follows an agency consultation on the proposals.

The NFU has repeatedly reiterated its total opposition to the plans and the potential effect they will have on the competitiveness and sustainability of the red and white meat sectors. It is urging farmers to attend the meetings to voice their concerns.

NFU livestock board chairman, Alistair Mackintosh, said farmers would undoubtedly face the brunt of the charges. “Both beef and lamb producers have gone through a number of years of turmoil and neither sector can afford the additional burden.”

The NFU has called for a full review of meat controls to replace what it claims is an outdated system with a more efficient and proportionate inspection regime. “If the FSA is unable to do more to reduce its costs and deal with current overheads then an alternative model should be seriously considered,” said Mr Mackintosh.

“This could involve the delivery of inspections carried out by an external private sector provider(s) with the FSA left to carry out an audit function.”

The best way forward would be to shelve the current proposals for full cost recovery, while a comprehensive review of existing controls was undertaken, said Mr Mackintosh.

The agency could examine the review in partnership with the industry and highlight areas where efficiencies could be made and alternative delivery methods found.

“Once we are satisfied that all options and potential efficiencies have been explored and implemented we can re-examine the agency’s current need for full cost recovery.”

In the meantime, it was vital that producers attended these public meetings, said Mr Mackintosh.”The FSA board must be made aware of the realities of its proposals and hear first-hand the concerns of industry.”

Details of the meetings can be found online.

The Food Standards Agency have different systems through which to hear the views of stakeholders in Scotland, Wales and Northern Ireland. Discussions regarding the same issue are being held in food advisory committee open meetings, which are also taking place this week.