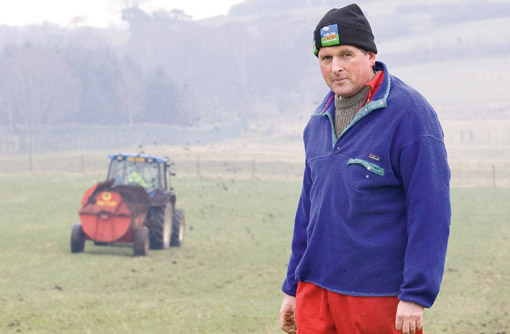 Basic slag from Port Talbot has been applied to grassland in Gower. The product was chosen for its trace element value, phosphate content and liming ability. Cereals have had their dressing of P and K and those corn fields that were grazed by sheep have recovered well.

Gower lies on limestone rock and sometimes “sinks” open in a field without warning as underground water erodes rock below the surface. The other day a hole four foot across and about 15ft deep appeared in a field of hoggets. It looked like a mine shaft.

At Cwmfron a window in the weather allowed us to spread fym on to next year’s silage ground. We like to do this before the end of January and time was running out. The ground is now saturated and feeding sheep outside is a bit of a mess.

Scanning of the Mules and Texels went well with an overall figure of 181% which was identical to last year. Our single farm payment was received on 27 January, which was late compared to most Welsh farms as 95% were paid by the end of December.

The arrival in England of Schmallenberg virus is a worrying development especially if it is midge borne. I saw midges at 1,000ft above sea-level in mid-January. I think the government handled the bluetongue threat well and farmers in the West owe a debt of gratitude to livestock keepers in the South and East who set up a firewall by vaccinating their stock.

• Read our special report on the Schmallenberg virus