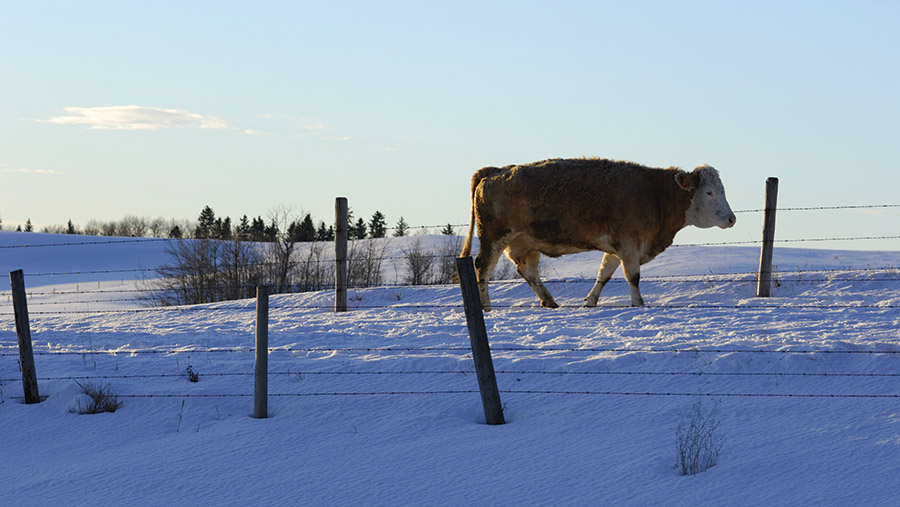 Beef production is a major enterprise in Canada, with more than 90,000 producers in the country.

However, with harsh winters and hot summers ⁠— as well as the increasing population putting pressure on food demand ⁠— Canadian producers have had to tailor their systems over recent years to increase production while ensuring sustainability ⁠and profitability.

This has been achieved by taking a fresh approach to issues such as resource cost and breeding strategy.

Dr Bart Lardner, University of Saskatchewan, has been leading research on suckled beef production in Canada.

Below, he shares what UK producers could learn from Canadian producers to improve suckler herd profitability.

The key aim of any suckler herd is to rear good, strong, fertile cows that produce healthy calves.

He suggests working towards achieving the following targets to improve fertility and calf viability:

Canada also has a “GOLD” system of key performance indicators used to monitor production efficiency. These include:

2. Cut your cost of production

Measuring the unit cost of production (UCOP) is the single most important index number in a suckler system, according to Dr Lardner.

“The unit cost of production is basically your break-even price, so if you want to improve profitability, you need to know what this is.”

In Canada, this is expressed as $/cwt of calf produced, but for UK producers it can be calculated by dividing total herd costs by the total kilogrammes of meat produced.

According to Dr Lardner, there are two ways of reducing this break-even cost ⁠— either by decreasing overall herd costs or by increasing the total kg of calves produced.

“In practical terms, this could be thinking about looking at introducing outwintering programmes to minimise housing and feeding costs, or by implementing stricter fertility measures to increasing pregnancy rates.”

Factors to consider include:

3. Use forage and grazing systems to reduce feed costs

With high variation in quality and availability, feed is one of the most expensive costs to beef producers in Canada.

As a result, producers and researchers have experimented with a variety of key forages to make feeding and grazing systems as efficient as possible. Popular choices include:

When it comes to outwintering and grazing systems, this is done in a variety of ways, including swath grazing.

This involves growing an annual cereal ⁠and putting the cows on to the crop, but limiting grazing to three or four days to control utilisation and reduce spoilage.

It is also recommended to supplement with a good trace mineral programme.

As well as keeping costs down, outwintering also helps producers improve nutrient-poor areas of land by putting manure back on the ground ahead of the next growing season, says Dr Lardner.

Whichever system or forage you choose, the key thing is to evaluate system impact on cow performance, he adds.

“Take into consideration things such as nutrient deposition at winter feed sites and how you can use outwintering to improve poorer areas.

“Most importantly, be sure to have an accurate figure of the true cost of your system.”

Another area the country has focused on is creating heifer development programmes to replace dated standards that don’t meet the requirements of modern-day beef production.

In 2014, Dr Lardner and a team of researchers entered into a two-year study that looked at 176 spring-born Angus heifers.

Animals were randomly allocated a target weight gain pre-breeding (moderate or high) and split into two different development systems ⁠— either indoor or extensively bale grazed ⁠— to see if this had any effect on the productivity of the heifer.

The results showed no major difference in terms of pregnancy rate or conception rate, nor did it highlight any big discrepancies between first calf birth weights.

Where there was a difference though, was in cost ⁠— the high gain system costed significantly more, without producing any tangible benefits.

According to Dr Lardner, this proves extensive systems can be a more cost-effective way to run a suckler system, without having a negative impact on the prolificacy of the cow or the productivity of her offspring.