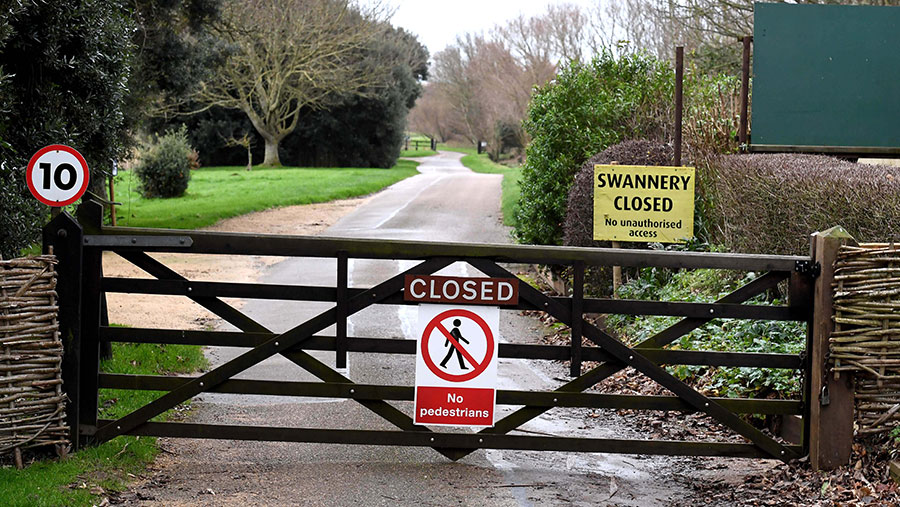 Poultry keepers are being urged to stay vigilant after the first avian flu outbreak this winter was confirmed in the UK.

Defra confirmed the H5N6 strain of the disease was detected in 17 wild birds in south Dorset – the same strain that has been circulating in wild birds across Europe in recent months.

This is the first time avian flu has been detected in the UK this winter.

According to local reports, mute swans – one Canada goose and one pochard duck – at the popular tourist attraction Abbotsbury Swannery were affected.

A spokesman for the Ilchester Estate, which owns the swannery, said the dead birds had been found on the Fleet Nature Reserve, near Weymouth.

The swannery is closed to the public over the winter and is not due to reopen until mid March.

Public Health England said the disease does not pose a threat to humans, but because it was found in wild birds it could easily spread elsewhere.

Therefore, poultry keepers are being advised to increase vigilance and biosecurity.

UK chief veterinary officer, Nigel Gibbens, said: “As the virus has been circulating across Europe, this finding has not come as a surprise.

“But it is vital that anyone who keeps birds – whether a few in a back garden or thousands on a farm – is vigilant for any signs of disease.”

Suspected cases of disease must be reported to the Animal and Plant Health Agency and poultry keepers must maintain good biosecurity to reduce the risk of their birds becoming infected, he added.

If you’re in #Dorset, find out if you are in the local #avianinfluenza prevention zone. Enter your postcode to find out what action you should take #birdfluhttps://t.co/zI2gexH4bi pic.twitter.com/Xh2Mz59qky

Defra has introduced an avian influenza prevention zone which applies to everyone who keeps poultry or captive birds in specific, targeted areas of south Dorset.

All keepers in this prevention zone must follow detailed legal requirements on strict biosecurity, whether they have commercial flocks or just a few birds in a backyard flock.

This includes feeding birds indoors to stop them mixing with wild birds, cleaning footwear, keeping bird enclosures clean and tidy and their food and water in enclosed areas that wild birds cannot reach.

There are no plans to carry out any culls or restrict movements.

If you suspect disease in your own flock, or you find dead wild birds such as wild ducks, wild geese, swans, gulls or birds of prey, you must let Defra know. Call the Defra helpline on 03459 33 55 77.