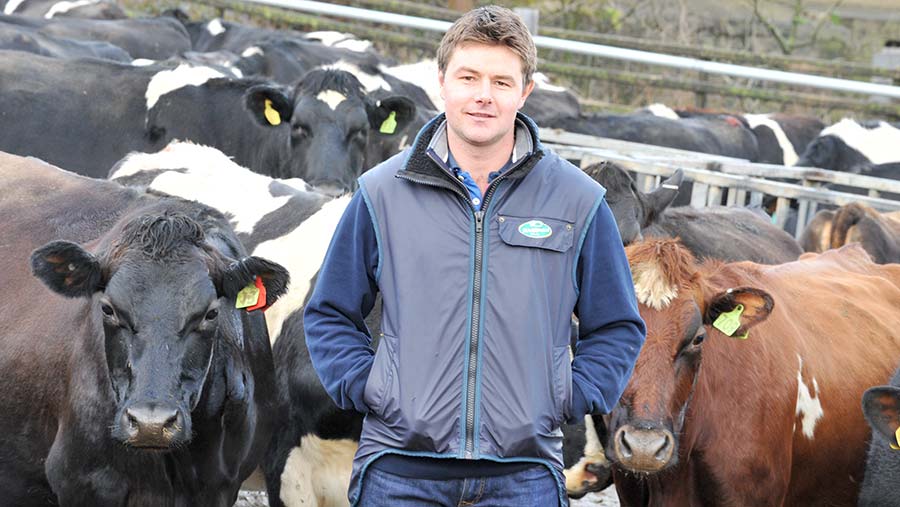 A Welsh dairy business is achieving a milk output of 19,893 litres/ha from the grazing platform since improving grass performance with a radical programme of reseeding and rebalancing of soil fertility.

When James Brothers bought Duckspool, a 121ha grassland farm near Haverfordwest, Pembrokeshire, in 2009, all the land was down to long-term leys.

Reseeding the entire farm with a mix of late-heading tetraploids and diploids and clover to match a spring-grazing system has allowed the business to stock the grazing platform at 4.1 cows/ha, with the farm produces an impressive 14,159 litres milk/ha overall.

Rhys James, who manages Duckspool and farms with his father Nigel and uncle Chris, says the farm grows an average of 15t DM/ha.

“This is from an annual fertiliser use of 250kg/ha on the milking platform,” says Mr James, the 2017 winner of the British Grassland Society’s grassland competition.

The farm is run on the same principles as the family’s other dairy enterprises in Pembrokeshire.

“Duckspool was always going to be a spring-calving farm where we got as much production as possible from grass,” Mr James explains.

The farm had not been run as a dairy unit for six years, so there was an opportunity to shape it to suit this system.

The entire farm was reseeded with a grass seed mix placed high on the recommended list of Irish research body Teagasc, and containing Tyrella. An additional 58ha of rented land has also been reseeded.

Soil fertility has also been addressed, with phosphate and potash included in fertiliser applications and lime applied. The stocking rate has also boosted nutrient levels.

Soils across the entire farm are now at pH 6 and at index 1.5-2 for phosphate and potash.

“We have our own GPS-linked variable-rate fertiliser spreader for applying fertiliser to our grazing land every three to four weeks and to the silage ground as and when needed,’’ Mr James explains.

The farm is stocked with 430 New Zealand Friesian cross Jersey cows, run on a paddock grazing system with all 32 paddocks accessed by cow tracks.

Cows graze by day in February; by March they are mostly out at night also if weather allows and grass covers are sufficient for this additional demand.

Replacement heifers – 140 a year drawn from calves born in the first three weeks – graze a 10ha block at Duckspool inaccessible to cows and off-lying land too.

Grass is measured weekly with a quad bike-mounted electric reader with information added to Agrinet to create a grass wedge.

“With this data we can decide which paddocks to take out of the rotation for round bale silage during the peak growth periods in order to remove the surplus to ensure we have the highest-quality grass for grazing,” says Mr James.

“We can also decide when to bring in extra dry matter in the form of silage or concentrates if the wedge shows a deficit.”

Concentrates are fed at a flat rate of 4kg a cow throughout lactation and silage is often buffer-fed in mid- to late summer, with cows held back after milking and the silage fed in bunkers.

Mowing and tedding is carried out in-house, but contractors are used for the rest of the silage operation. 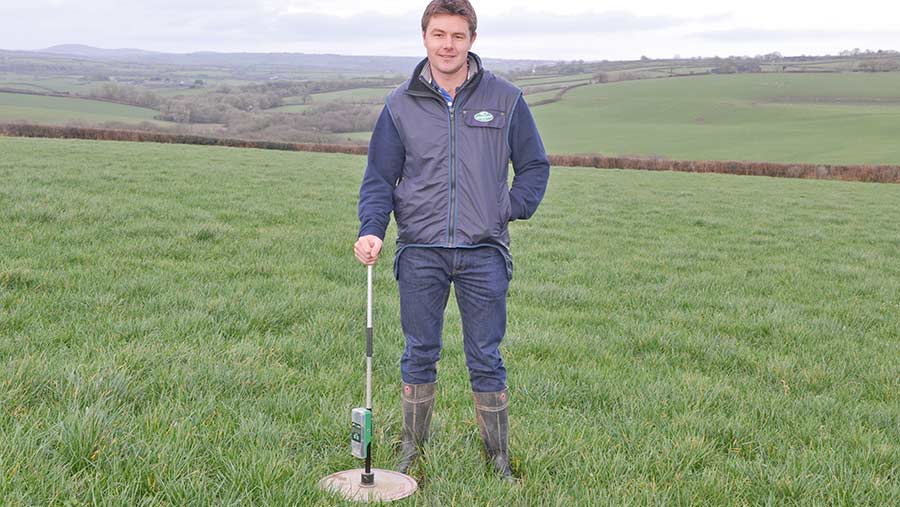 Slurry is applied to the grazing paddocks by contractors via a dribble bar and umbilical system, with the farm’s own tanker used to apply slurry to the silage ground.

There is storage for up 3m gallons of slurry in a recently constructed lagoon.

“It has capacity for six months of storage, which allows us to spread slurry when the time is right and when weather conditions allow. This means the nutrients can be best used,” says Mr James.

“I believe by spreading slurry at the correct times and in the correct ground conditions we are growing more grass and it has reduced soil compaction and enabled better soil health on the medium loam soils.”

He says Duckspool is a good grass-growing farm and by creating the right infrastructure from the outset, handling cows is relatively straightforward.

The farm’s team is an asset, he adds. “They are all excellent at their roles and work well as part of a team, which is crucial for running an efficient dairy farm.

“We have created a robust and sustainable system that is well placed to cope with volatile milk prices.”

Cows are winter housed in a simple, open-sided cubicle shed fitted with mattresses covered with sawdust as bedding.

Constructing this shed has enabled the business to: