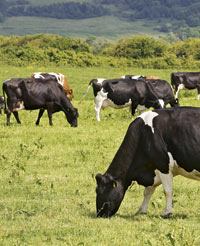 British grassland farmers will now be able to experience the benefits of innovative forage products through Barenbrugs’ Innovations programme.

The first of these new products is Proto Plus 1, a unique mixture of Crimson clover and Westerwold ryegrass, which produces a high-protein forage crop when sown in the autumn.

In addition to producing valuable yields of high-protein forage, the product also fixes its own nitrogen, feeding the companion grass and leaving residual nitrogen for the following crop. It also leaves a grass residue which can be grazed, until ploughed for a winter-sown crop.

The second innovation is Proterra, which is designed to be sown under winter cereals and increase the soil’s organic matter in arable rotations.

Proterra is a specially selected amenity tall fescue variety, not susceptible to vernalisation, so will not self-seed into the crop. It increases the organic substance in the soil through extended root growth and by biomass production above the soil.

Proterra can either be sown with winter wheat between mid-September and November or sown onto frozen soils at between December and March. Following the cereal harvest, the grass will grow rapidly, providing grazing for sheep or cattle, before being ploughed in as a green manure.

The third new product in the line-up is Protein Lamb Finisher. This was developed from the trials run by AFBI at Loughgall, which were looking at 20 alternative forage protein crops. These included potential red clover varieties, lucernes and Commander chicory, which was sown by itself, mixed with perennial ryegrass and mixed with Lemmon red clover.

When sown with Lemmon red clover, it consistently produced the highest yields for the duration of the trial. David Long adds: “As chicory isn’t a legume, it cannot produce its own nitrogen, so needs a source of nitrogen to be able to maintain its high level of leaf production. By combining it with Lemmon red clover, another high-protein forage, we created the ideal lamb finishing forage, which has no need for nitrogen fertiliser and leaves a residue of nitrogen for the following crop.

“When it was time for the on-farm trials, we put the mixture under as much ‘farming’ pressure as possible. It was continuously and rotationally grazed. Despite the sward being relatively open it had no problem carrying relatively high stocking rates and continued to produce well through the extended dry periods of summer 2010.”