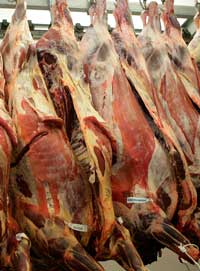 Asda, Sainsbury’s and Tesco have come under fire for the amount of imported fresh beef and lamb on their shelves.

EBLEX has published its Beef and Lamb Watch figures for October which the show amount of chilled and fresh beef and lamb seen on supermarket shelves during the month.

Alastair Mackintosh, NFU livestock board chairman, said while some retailers had 100% British beef and lamb on their shelves the survey showed others had not.

“However, it is very disappointing to see that both Asda and Tesco were not stocking 100% British lamb in October.

“I think it is unacceptable that major retailers are placing foreign lamb on the shelves during the autumn months when domestic supply is plentiful. It is also disappointing to see the level of foreign beef stocked on the shelves of both Asda and Sainsbury’s.

“If some of the retailers can source 100% British beef and lamb then I don’t see why they all can’t.”

The National Beef Association said the survey confirmed that more pre-packed, fresh/chilled, beef from the Republic of Ireland was being offered by multiple retailers.

“The most disturbing detail in this regular survey is the apparent step-change to Asda’s commitment to British beef,” said the NBA’s director Kim Haywood.

The survey suggests that from October 2008 to October 2009 Asda dropped the stocking of British beef on its shelves from 64% to only 42%.