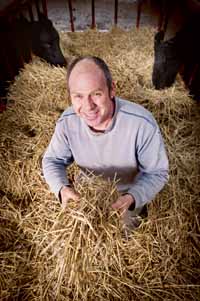 Performance advantages that come from the way a suckler cow is bred must be taken into account and fully exploited when considering the type of cows used to produce the most profitable suckled calves.

That’s according to Harper Adams University College’s beef specialist Simon Marsh, who says a three-way-crossed suckled calf has a 23.3% performance advantage over a pure-bred calf and a 7.8% advantage over a first-cross calf.

“The target should be to produce a 200-day calf weight that is 50% of the weight of the calf’s dam. Having small, medium-sized milky cows that are put to high index bulls to deliver frame, growth and muscle, will help achieve this target,” he says.

Breeding from the right cow

“That performance couldn’t be achieved without milky cows. These bull calves went on to reach carcass weights of 438kg at 447 days of age, which is a phenomenal performance and has a direct link to the milking ability of their dams and the genetic merit of the sire,” says Mr Marsh.

At Hopping Farm all the Limousin-sired heifer replacements are sourced privately from a herd where dairy cow breeding avoids extreme Holstein genetics. As a suckler cow, the Limousin breeding provides conformation, the Holstein provides milk and growth, explains Mr Frost.

“I know there has been a trend towards retaining your own herd replacements but I don’t want to end up with big, inefficient beefy-type cows that lack milking ability. Holstein breeders are equally concerned about longevity in their dairy herds while still producing cows that will milk well and yet hold their body condition. As suckled calf producers we can capitalise on that,” he says.

He maintains regular contact with the dairy farm that supplies his suckler replacements which uses a well-bred Limousin bull.

“It’s important to know where your replacements are coming from and how they are bred. Extreme dairy genetics aren’t wanted in the suckler cow but that doesn’t mean we should be looking towards an old-fashioned black-and-white cow either. It’s important to find a reliable source of supply – preferably of heifers sired by a good bull.”

Mr Frost says it’s taken him a while to find someone who is producing the type of cow he can rely on, but the cow has a major part to play and he says it’s worth spending time looking for those that can do the best job.

The replacement rate at Hopping Farm is lower than the national average – 17. 6% compared to 21.7% – so longevity isn’t an issue, adds Mr Marsh.

“Considering the current value of cull cows, a culling rate of about 20% isn’t a real concern when a young fit cull cow can cover the cost of a replacement bulling heifer.”

Cows are weighed and condition scored at weaning. As a measure of their cows’ efficiency, Mr Marsh says suckled calf producers should aim to achieve a 200-day calf weight that is 50% of their cows’ liveweight.

Mr Frost’s cows weighed 595kg at weaning and produced an efficiency factor of 56.5%, which is the highest Mr Marsh has ever seen.

“When you’re below 50% you either have big cows that are too costly to maintain or calves that are under-performing due to a lack of milk and/or poor quality genetics.”

The herd at Hopping Farm is cubicle housed in the winter and fed a restricted diet of big-bale silage plus straw which is aimed at holding or manipulating cow condition to achieve cows that are “fit not fat” at calving and in condition score 2-2.5.

Cows are housed in a portal-framed building but there are no raised cubicle-beds. Instead cows lie on mats fitted directly on to the floor but it’s a system that has proved to be successful and cows keep clean.

Five years ago the herd was housed in the same yard bedded with straw but the change has saved more than 100t of straw a year – that’s cut £6000-7000 off costs, according to Mr Frost.

Cows are fed a restricted quantity of silage with ad lib straw but all cows must have access to the feed. The system is based on two feed-trailers and four ring feeders. Each feeder is layered with good quality wheat straw topped with grass silage. It takes cows just under 24 hours to clear the feeders.

“The system ensures the cows’ rumens are full. Feeding silage with straw is an excellent combination compared to straw and concentrates which forces the rumen microbes to adjust to degrading a diet of both starch and fibre,” says Mr Marsh, (see table 2 and 3 for diets at Hopping Farm).

“With a forage-only ration the microbial activity is improved and the cows extract more from the straw than the theoretical value.”

The herd has free access to high magnesium/copper/selenium molassed mineral buckets throughout the year. Average consumption is 55g a cow a day – 20kg a cow a year.

Although the recommended condition score for spring calving sucklers at weaning in the autumn is 3.5 and then dropping to 2.5 at calving, Mr Frost reckons these targets would increase his feed costs.

“I’d have to buy more straw and an expensive protein concentrate and use less silage if we wanted cows at condition score 3.5 at housing. By holding them at 2-2.5 – with a weight gain of 0.3kg a day as the unborn calf develops – we can provide cows with 89MJ of energy from the silage and straw diet,” says Mr Frost whose cows had an average condition score of 2.28 at weaning.

About six weeks before calving any cows in condition score 3 – usually only a handful – are separated and fed ad lib straw and minerals to achieve score 2.5.

“It’s important these EBVs have a high accuracy (more than 50%). Suckler producers who breed heifer replacements have an additional tool in the form of maternal trait EBVs,” says Mr Frost.