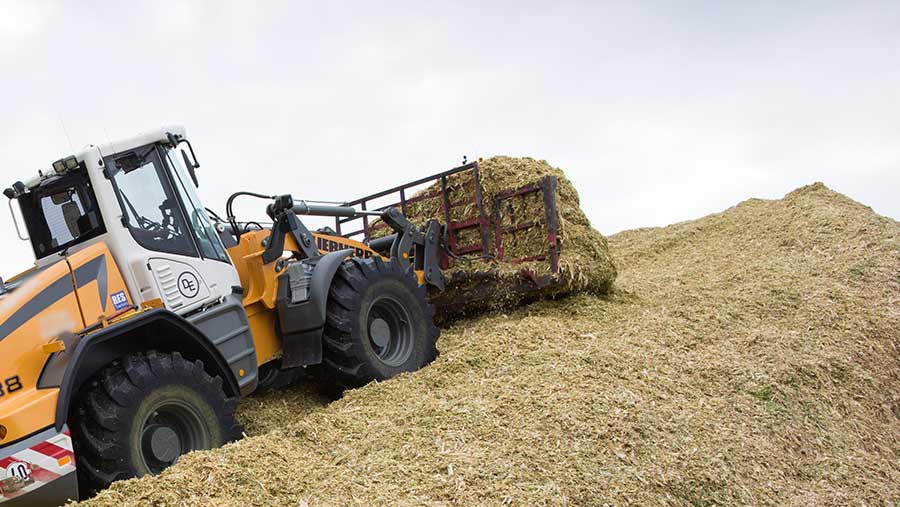 Maize looks set to be early this year as a result of favourable weather conditions.

Grainseed technical director Neil Groom and University of Nottingham Professor Mike Wilkinson consider the six key areas where maize losses occur happen from harvest to ensiling and feeding and give farmers tips on how to reduce them.

To get the best silage quality, harvesting the maize crop at the right dry matter (DM) is essential.

The optimum is to harvest between 30-35% DM. That is the case whether the maize is being grown as a feed for dairy or beef cattle or as a feedstock for anaerobic digesters.

If it is cut too early, for example at 25% DM, not all of the sugar photosynthesised in the leaves will have turned to starch in the cob. This lowers the feed value and, after ensiling, will produce a wetter, more acidic silage that cows won’t want to eat.

If the crop is too mature at 38-40% DM, grains become very hard and silage digestibility falls. A drier, more spongy crop in the clamp also becomes harder to consolidate and the trapped oxygen leads to poorer fermentation and, again, to lower feed quality.

Harvest date can be loosely estimated up to a month in advance, as most crops increase in DM at a rate of 2-3% per week in the five weeks beforehand. But assessing dry matter in the standing crop is no longer a simple visual process.

In older varieties senescence of the leaves and cob maturity were more closely linked and it was possible to estimate dry matter by eye and get within 1% accuracy.

In modern varieties, however, the green leaf can be sustained long after the cob has reached maturity and the crop can look greener for longer, giving a false impression that the cob is yet to mature.

Field tests should be made as the harvest period draws nearer. As a guide, open up 10 cobs in a row and check the maturity of grains for evenness. Putting pressure on the grain with a thumbnail will give a good indication of grain ripeness.

However, to gain an accurate assessment of dry matter a microwave test should be used.

The length chosen should depend on advice from a nutritionist and what other forage types are included in the ration.

The standard is between 18-20mm, which gives enough long fibre to promote rumen activity.

Any finer and it is likely the papillae in the rumen lining will not be stimulated.

If grass silage is leafy and lower in fibre, for example where it has been taken from an early cut, it may be advisable to increase the chop length to get more long fibre in the ration.

However, when a high degree of long fibre is needed, for example 25mm chop lengths, it increases the difficulty of compressing the crop in the clamp.

In this case, it is better to load the clamp in thinner layers to get adequate compression.

The aim is to exclude air from the clamp to prevent aerobic spoilage. ensity of the ensiled crop has a major impact on in-clamp losses.

Every 10kg DM/cu m increase in density will reduce DM losses by 0.4%, research has shown.

If there is not sufficient density, air will be trapped or penetrate the silage allowing acetic acid producing bacteria, yeasts and moulds to thrive rather than the lactic acid bacteria.

And, if silage is too wet, the butyric acid formed produces a foul-smelling and unpalatable feed that the cows will not eat.

When the clamp is being loaded it must be in very thin layers and rolling must be continuous.

Frequently, the forage is cut and delivered to the clamp quicker than the rolling machinery can achieve the target consolidation.

To provide sufficient compression, the rolling machinery on top of the clamp should weigh a quarter of the weight of the maize delivered into the clamp every hour (See “Calculating the required weight”).

Once the density has been achieved the clamp must be covered immediately. Never leave sheeting until the next morning.

For example, if a contractor chops maize and delivers it in 16t trailers, at a rate of one load every 10 minutes, that equates to about 100t/hour.

In this situation 100t/hour multiplied by 0.25 would mean 25t of machinery on top of the clamp would be required, that means two machines rolling.

An additional tip to aid compression is to use vehicles with narrow tyres, which maximise the weight per sq cm to squash out air. When drier crops (+40% DM) are harvested, packing tractor weight must increase considerably.

Some farms can achieve densities of up to 1t of fresh weight crop/ cu m. The recommended minimum silage density is 700 kg fresh weight /cu m.

Sheeting technology has improved in the past five years, now many growers use a cling film underneath ordinary sheets. This reduces the air gaps by adhering to the silage.

Better than this, however, is the use of a true oxygen barrier sheet, which dramatically reduces the amount of oxygen that passes through the sheet from an oxygen transmission rate (OTR) of more than 300cu cm per sq m per day for traditional sheets to an OTR of less than 10 for oxygen barrier films.

After netting is added – to prevent damage from birds and vermin – weight should be applied using mats and gravel bags.

As the clamp is opened to feed it is important to keep weight on the leading edge of the sheet to prevent the wind lifting it and allowing oxygen to penetrate the silage.

In addition, starch grains soften over time in the clamp, affecting the digestibility.

This variation makes it imperative to test silage quality as the winter feeding season progresses. To accommodate the changing quality, sampling and ration re-formulation should be carried out at least once a month.

6. Reduce the risk of silage spoilage and disease

Opening the clamp exposes the face to air causing the silage to heat up within a few days. In one week, exposed silage will lose about 15% of its DM through spoilage.

The aerobic action will render the feed less palatable and cattle intakes will suffer.

Spoiled silage is also associated with mycotoxicosis and listeriosis.

To reduce the risk of these diseases it is essential to progress back through the clamp as quickly as possible and minimise exposure of the face to the air.

The recognised minimum progression rate is  1m/week in winter and 1.5 to 2 m/week in warmer, wetter summer conditions.