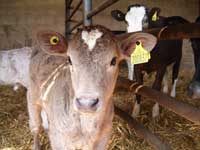 The number of calves available for beef production in the UK has fallen dramatically in the last 12 months, according to EBLEX analysis of BCMS data.

The overall number of calves registered by beef sires between August 2008 and July 2009 was 2.1m, a fall of 108,000 (5%) on the previous year, explains EBLEX economics manager Mark Topliff.

“This is a result of the declining national cattle breeding herd and a continued switch away from beef inseminations by dairy producers,” he said.

Despite the continued decline in dairy cow numbers, nearly 64,000 more dairy sired calves were registered in the year, he adds.

The biggest losers in breed terms were Limousin and British Blue registrations, a result of their popularity among dairy producer’s AI’ing cows to dairy sires, he explains.

“However, Limousins continue to dominate the beef industry, being responsible for 22% of all calves registered, ahead of Charolais at 10% and Aberdeen-Angus at 9% – the only main breed not to record a decline.”

Scroll down for table