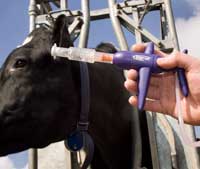 A Dutch farmer whose dairy herd was hit by bluetongue is visiting livestock markets across Wales to urge farmers not to delay vaccinating against the disease.

Jakob Pustjens told farmers attending Welshpool Market in north Powys on Monday (9 February) that experience in the Netherlands showed the disease had devastating impacts on animal welfare and businesses.

“On our farm bluetongue struck in the autumn of 2007 and I can tell you it is a quite terrible illness that causes animals great pain,” Mr Pustjens said.

“Over 20% of our 100 cows had flu-like symptoms and problems with their feet that made it difficult to walk.

“Milk yields fell, some aborted in early pregnancy and it was generally difficult to get cows back in calf.”

Mr Pustjens said the disease cost his business £13,000 but he “got off lightly” compared with many other farmers near his farm in southern Holland.

“When the Dutch Government gave the green light to vaccination I did not have to think twice,” he said.

He urged farmers not to follow farmers in northern Holland, who believed virus-carrying midges would not reach their units.

By the time that livestock showed visible signs of the disease it was already too late for them, he said.

Sheep in particular could not fight the disease and many died within a few days.

Cattle could recover but high yielding dairy cows had lower resistance, especially when coping with the stresses of peak lactation.

He said he had seen no evidence of links between the vaccine and either abortions or infertility, but animals that developed the disease showed a higher incidence of both.

“My advice to farmers in the UK is vaccinate before bluetongue is diagnosed in their area.

“They should also keep up the pressure on scientists to develop protection against other strains that have appeared in some European countries.”

The visit to Welshpool was the first many planned for England and Wales over two weeks with the support of the Livestock Auctioneers Association and Merial Animal Health – though Mr Pustjens said he had no connection with the vaccine production company.