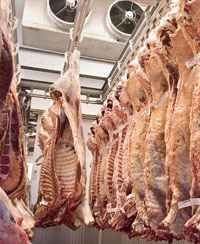 Continued strong demand and tight supplies meant clean cattle prices were nudging the dizzy heights of £3/kg in some areas this week.

Processors reported deadweight prices of about 280-290p/kg and Anglo Beef Processors managing director Richard Cracknell said some prices were “getting on for £3/kg”. “At the moment we’re still in a bit of a stand-off season after the festive period,” he said on Tuesday (13 January). “Supermarket meat trade went very well over Christmas and New Year and there’s still a lot of promotional activity going on, which is helping demand.

“Generally we’re paying about 290-295p/kg, compared with nearer 270p/kg before Christmas and about 210p/kg this time last year. But we’ve seen before that when high prices are passed on to retail, it can kill demand,” he warned.

EBLEX economist Mark Topliff said beef prices across the country were about 70p/kg higher than January 2008. “The feeling is that retail sales are good, possibly helped by the spell of cold weather. On the supply side, prime cattle numbers are still tight and we’re expecting something like a 2% fall in the first quarter of this year.”

As a result, he was “cautiously optimistic” prices would remain firm, but much depended on how demand changed over the coming weeks. “We’re going to see some softening in demand, but the question [for prices] is by how much and whether it will be outweighed by the tightening of supplies.”

Cull cow prices had also begun the New Year well, said Richard Phelps of processor Southern Counties. “We’re seeing prices of 220p/kg upwards, which is exceptionally good considering that when they came back into the food chain three years ago, prices were £1/kg less than that.”

The National Beef Association urged breeders not to see the surge in cull cow values as a chance to bail out of the industry. “The signals covering long-term survival are good,” NBA director Kim Haywood said. “We might see a bit of see-sawing in prices as cattle come to market, but the key message is supplies are tight across the UK and Europe and demand for beef is good.”