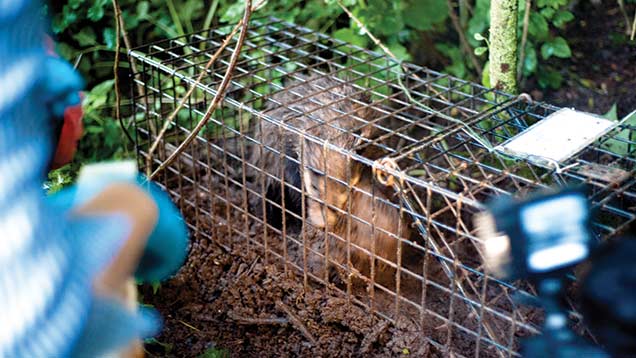 Ireland is often held up as an example of a country that has shown that culling badgers is a vital element of any strategy to eradicate bovine TB.

Ministers refer to it in the same breath as New Zealand and Australia, arguing that no other country in the world has tackled the disease without addressing its spread in the wildlife reservoir.

At the launch of Defra’s revised strategy to tackle TB in England in September, Defra secretary Liz Truss claimed Ireland has seen its numbers of infected cattle drop by nearly two-thirds since 1999, and for the first time since the 1950s the Irish government thinks it can achieve TB-free status.

But how does the approach in the Republic of Ireland differ from that being taken in England and Wales? And do the results stand up to scrutiny?

At first glance the figures are compelling. Since the introduction of a badger culling policy back in 2004, the number of reactors has fallen from 22,967 to a current historic low of 10,581 (from January to August).
In contrast, latest figures from Defra show that 21,437 cattle were slaughtered as TB reactors in Britain from January to August 2014. And while this has fallen from 22,622 in the same period in 2013, it is still double the number of cattle slaughtered in Ireland (see graph).

Both countries have similar arrangements in terms of TB testing and movement controls. So supporters of the cull say the only compelling difference between the British and Irish strategy when it comes to tackling TB remains the badger cull.

Although badger culling started in England in 2013, it is only taking place in two hotspots and on a trial basis.

Under the Irish programme, which started in 2004, badgers are caught using “stop restraints” and are shot within an area of 2km around any farm that has more than three reactors. Since it began, some 6,000 badgers have been culled annually, costing €3m (£2.3m) each year.

Bert Stewart from the Irish Farmers Association (IFA) says the figures speak for themselves.

“The reality is that until decision-makers finally took on board what the IFA had being highlighting with regards to the reservoir of disease that was being left untouched in our badger population while farm families’ incomes were being destroyed, no progress was made,” he says.

“It is only since the Wildlife Control programme was implemented in the early 2000s following a prolonged IFA campaign that the programme can be seen to be making any progress.”

But critics claim the Irish experience does not support further culling in England or Wales.

Wildlife charity Care for the Wild says falling rates of TB in England, achieved by cattle controls alone, expose the Republic of Ireland’s cull as “blarney”.

They claim that Northern Ireland, where no culling takes place, has been more successful in reducing TB levels than the Republic of Ireland.

Meanwhile in England and Wales, the number of cattle slaughtered and herd incidence has
also decreased overall.

Martin Haworth, NFU deputy director general, says TB data from the past 10 years rubbishes claims that the situation is better in NI compared with Ireland.

“If that is the case, then why is it that Northern Ireland is looking at introducing a culling policy?” he says.

“Professor Ian Boyd made a presentation to the House of Commons last year where he actually drew the opposite conclusion. He showed the rate had gone down in the republic and up in Northern Ireland over a long period of time.”

In fact, Mr Haworth says the success of badger culling in Ireland only serves to further strengthen the UK’s position. But he says the UK needs to learn lessons from Ireland.

“It does really need to be a long-term commitment. It is not something you can drop in and out of every time there’s a new secretary of state,” he says.

“They use a more effective way of catching badgers than we do. It’s easier to put in place, less costly and more difficult to sabotage, which I think should be looked at in England and Wales.

“It’s called a stop restraint. People regard it as a snare, but it isn’t. The badger goes into the restraint and it is caught.” Mr Haworth says there’s been endless tests done to prove that it is humane.

However, he acknowledges the authorities in the republic are looking at a move to a vaccination policy. But he adds: “They don’t think culling is a permanent tool, but it is a necessary step to get the disease under control.”

The Department for Agriculture, Food and the Marine says a considerable amount of research has been conducted over the years that shows the removal of badgers results in a significant reduction in the incidence of TB in cattle.

Officials point to the East Offaly research project, where scientists compared the effect of badger culling in a removal area twith a control area. Results found TB breakdowns in a herd were 14 times higher in control areas.

However, the department says badger vaccination will play a key role in reducing levels of disease in Ireland even further in the future.

“The replacement of badger culling by badger vaccination, which is a major objective, presents a significant challenge, particularly in identifying an effective and efficient delivery method,” says a spokesman.

“The department, in conjunction with University College Dublin, has recently completed a three-year field trial in Kilkenny designed to assess the effect of vaccination on badger-to-badger transmission of tuberculosis in a natural environment. However, it will be some time before the results of that trial are known.

“Further trials aimed at measuring the effect vaccinating badgers has on TB in cattle will take place at a number of locations throughout the country in the next few years.

“Success in the field trials, which will take two or three years to complete, will eventually lead to implementation of a vaccination strategy as part of the national TB control programme.”

Bert Stewart, animal health project team chairman from the Irish Farmer’s Association, tells Rhian Price what is being done to get rid of TB in the Republic of Ireland.

In the Republic of Ireland, the TB eradication programme is based on the removal of infected bovine animals from the national herd once identified with the disease.

In high-incidence breakdowns [where there is more than three reactors], the number of badgers on the farmlands is reduced if, following an epidemiological investigation, they are found to be implicated in the breakdown.

Badgers are captured using stop restraints and removed by specially trained operatives under the supervision of Department of Agriculture officials within the terms of the license granted for the capture area.

Q Do Irish dairy and beef herds have to undergo compulsory TB testing?

Every herd in the Republic of Ireland must test once every 12 months in order to maintain its trading status.

Q What happens if a herd is found to have reactors?

If TB reactors are identified, further follow-up testing is required and paid for by the Department of Agriculture.

Follow-up testing is also conducted on neighbouring herds, and herds that purchased animals from the herd since the last clear test.

Movement restrictions are imposed, the reactors are removed, and testing takes place every 60 days until the herd has consecutive clear tests.

It is only then allowed to commence trading, and a further six-month check test takes place following derestriction. High-risk breakdown herds are put on a twice-yearly testing programme for two to three years.

Q What compensation system do you have in place for reactors?

In large breakdowns (more than 10% of animals within the herd), farmers also receive an income supplement payment paid for each reactor which is €25 [£20] a month for dairy cows and €38 [£30] a month for beef animals.

This payment is in no way reflective of the actual income loss experienced and is capped at a maximum of 100 eligible animals.

TB hit Peter Sherlock’s Co Meath farm with a vengeance in 2010. Up to that point the suckler beef producer had never had a large-scale problem with the disease and the area in which the farm is located had been relatively clear.

“There had been occasional reactors identified at an annual test with no more than three animals involved,” says Mr Sherlock.

“But these incidents were always followed up by two clear tests. However, in 2010 a large-scale breakdown was identified within the herd – 39 cattle were removed, including 38 cows and a yearling bullock.”

Mr Sherlock says as soon as the problem came to light Department of Agriculture veterinary inspectors walked his land and that of his neighbours, checking for badger setts.

“They quickly found a sick badger in an old sett that was in a hedge close to my own house. It was quickly removed, as were all the badgers in the setts within walking distance of the farm. I was led to believe the sick badger was the source of infection in my own case.”

Mr Sherlock says Department of Agriculture inspectors have revisited the badger setts in his area on at least one other occasion since 2010.

“It is policy in Ireland to remove badgers, if there is believed to be an associated TB risk,” he explains.

“But I am not sure just how rigorously they are following this up at the present time because of government cutbacks. What I do know is that there is a link between TB in badgers and the disease in cattle. And it’s a problem I would not wish on any farmer.”

Post-mortems of badgers in Ireland have revealed a very high level of TB infection, even though the country has a smaller badger population than England.

So wherever the disease has been a problem among the badger population, there has been a cull.

Fortunately for farmers, there has been relatively little public opposition to the cull, because as a rule people are more connected to farming than they are in England, says Mr Sherlock.

He has been clear of TB since the outbreak and is now back up to 80 cows, but he says the effect on his business has been far-reaching.

“What the general public do not understand is the tremendous knock-on effect for a farm business that follows in the wake of a major TB outbreak. Yes, the compensation is more than adequate.

“But money will never compensate a suckler farmer for the years spent in developing a herd of cows with the innate ability to produce quality beef calves. And this is a challenge I now have to cope with on a daily basis.”