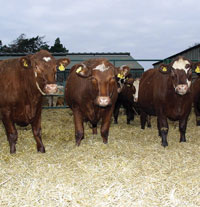 Speakers at last week’s British Cattle Breeders Conference, Telford, urged farmers not to rest on their laurels and to learn from other sectors and the experience available around the world.

For beef producers to be succesful in future they must look to make the level of genetic advance made by the pig sector in the past 40 years, according to John Alexander of PIC.

Mr Alexander told delegates that historically the pig sector had been much like the beef sector ,with large numbers of small herds. But due to economic pressures, the pig sector had adapted to change. “Pig producers have had to focus on consumer demands and have changed production systems and genetics to meet these objectives.”

In 1962 the average sow reared 14 pigs a year, but by 2002 this figure had improved to 21 pigs a year while in the same time period the feed required to produce a finished pig had dropped from 410kg to 273kg, he said. “However, when you look at the beef sector, average feed conversion ratio in US feed lots is the same now as it was then, 8:1.

Mr Alexander said the changes in the pig sector had been driven by consumers’ desire for the eating experience to be repeatable every time. “Consumers want the product this week to be the same as last week and for it to be value for money. Admittedly, some want specific production values such as antibiotic-free, but this will never be the mass market.”

The biggest change in the sector and the one the beef industry could learn most from was in genetics, he believed. “We’ve moved from worrying about pure breeds to using specific genetic lines selected for performance. Specialised breeding companies produce all the genetics for the industry and their specific lines are blended to produce the end product. So certain maternal lines are crossed to meet the needs of the customer, be that for improved milk yield or fertility, this also gives the benefit of heterosis in the first cross.”