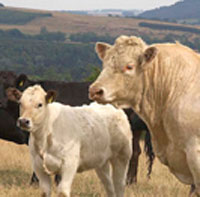 A Cumbrian farmer’s son has taken his school’s offer of taking a pet to school to the extreme by bringing along a 16-month-old Charolais bull.

“I don’t know how anybody is going to beat this unless they have an elephant.” he said.

The bull, Hallbankgate Dragon, is from Thomas’ parents’ pedigree herd of Charolais run on their farm at Brampton, Carlisle, and is due to be sold at Borderway Mart next Friday.

Due to his size, Dragon was unable to get into the school, so pupils were taken out onto the village green to see him.