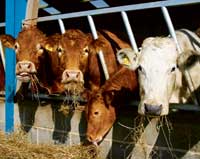 UK cattle, pig and sheep numbers have fallen to their lowest levels in at least 10 years, according to DEFRA’s December census of agriculture.

The pig herd fell by 0.9%, year-on-year, to just under 4.4m in December 2010. “An increase in input costs is thought to have contributed to this small decline in numbers,” says DEFRA.

Cattle and calf numbers slid marginally, to 9.9m head. “The breeding herd increased by 0.6% to just over 3.5m. This was due to a 2.3% increase in the beef herd, to 1.7m, which was offset by the continued decline in the dairy herd, which now stands at just over 1.8m.”

“This slowing in the rate of decline seen in the total sheep flock since 2007 reflects a more positive outlook for the sector as market conditions remain favourable, particularly for exports,” says the DEFRA report.

“On the down side, the lambing rate was low in 2010 due to the harsh winter, and the economic downturn could force some consumers to switch to cheaper types of meat in the future.”