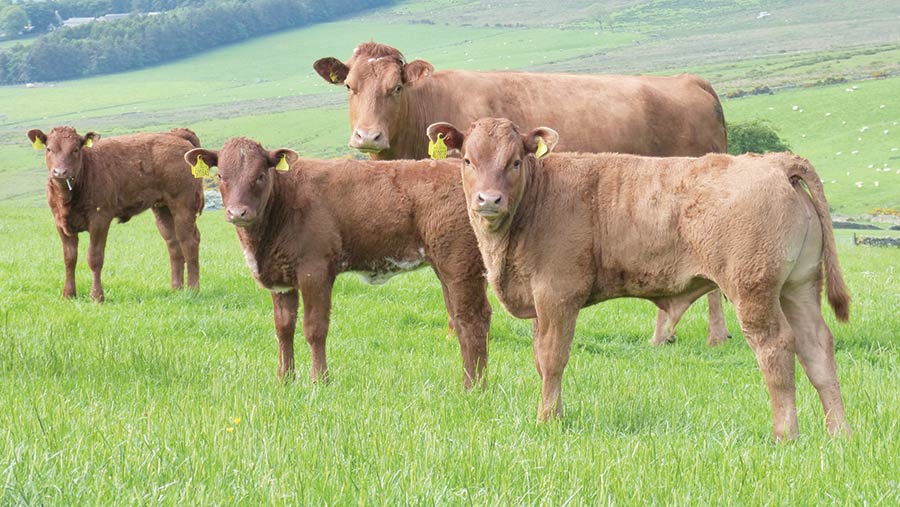 Measuring and recording grass growth and weighing livestock more frequently has opened up cost-saving opportunities on an upland grazing farm.

Originally from Boroughbridge, North Yorkshire, Mr Monkhouse moved from a county council tenancy in 2007, starting with 50 cows and 250 shearlings at Low Houselop.

The farm has bred hard-working stock. Last year the herd achieved a £472 gross profit margin per cow, putting the farm comfortably in the top 25% of all suckler herds on Farmbench, the AHDB’s costings programme.

A deer enterprise was added in 2017 to diversify income streams, and in September 2017 Low Houselop became an AHDB Strategic Farm.

“I grew up thinking about cost of production,” explains Mr Monkhouse. “Topping the mart is great if you can do it, but it’s about the costs that get you there that matter.

“Every year I learn and I am certainly not perfect. We have our successes and failures every year – it’s just about trying to improve.”

Pasture runs up to the fell boundary and ranges from about 860ft to over 1,000ft in the Durham Pennines.

Field sizes vary but are typically about 4-8ha. And, with the property not having mains water, the farm has struggled to rotational graze the cattle and sheep and subdivide pasture into paddocks.

However, a grazing trial (carried out as part of the farm’s involvement with the AHDB Strategic Farm project) has compared a 7.3ha block of pasture that was subdivided with a two-field 9.7ha block that was set-stocked last summer.

The land runs next to a natural water course and all paddocks in the field were supplied with water by dividing it up into long, thin sections running down to the stream.

The rotationally grazed field averaged covers of 3,340kg/ha DM, compared with 2,100kg/ha DM and 2,820kg/ha DM in the larger block.

This equates to being able to graze five more cows per hectare if grazing for seven days at a time on each hectare, explains veterinary nutritionist Debby Brown of Dugdale Nutrition, who is managing the Strategic Farm project with the Monkhouses.

By growing an extra 520kg/ha DM of grass each day, and with cows eating 16kg DM daily (2.5% of a 640kg cow’s bodyweight), the gains could lead to a shorter winter, less supplementary feeding in the shoulder months or possibly slightly higher stocking rates.

“Not everything works here,” explains Mr Monkhouse. “Calving at two and a really tight calving block don’t suit me, but dividing the paddocks up definitely does.”

Extra grass grown as a result of rotational grazing has allowed the number of ewes and lambs per acre to increase from five to eight.

Grass was measured with a plate meter whenever animals entered and left a paddock. Figures were stored on a programme called Pasture Management Software. 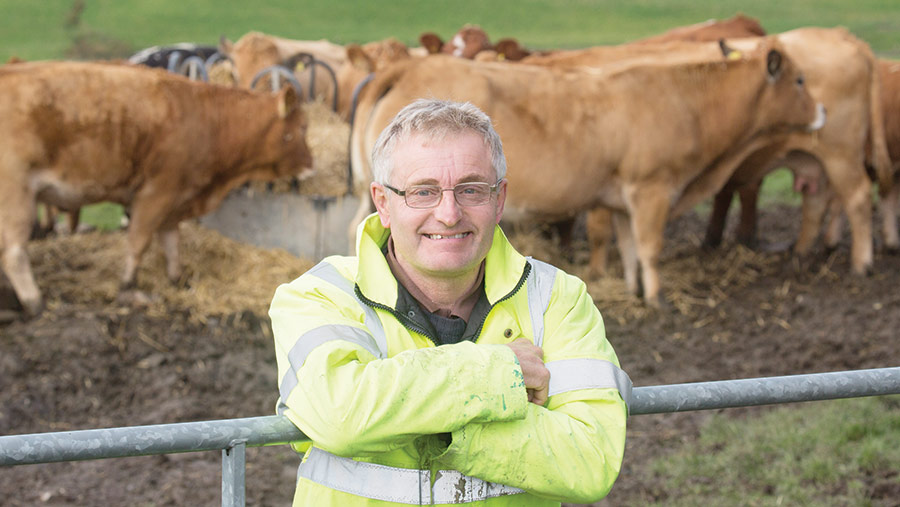 The Strategic Farm project also involved weighing calves and cows and calculating the weight of the calf as a percentage of the dam’s weight at weaning (cow efficiency).

Previously, Mr Monkhouse didn’t weigh cattle, but the project showed that adding weigh bars to a handling system (at a cost of £1,500-£2,000) can show how hard cows are working.

The trial has revealed the superior efficiency of the cross-bred cows.

The herd is mainly based around Limousin suckler cows and Shorthorn/Limousin-cross cows, with pure Limousin cows also bred to a Parthenaise bull to produce fast-growing calves.

The cross-breds are slightly smaller and slightly more efficient (see table). They had a great year in 2017, when they reared 100% (calves weaned per cow put to the bull).

Mr Monkhouse says: “The Limousin and Shorthorn cross is clearly a good combination. I don’t know why there aren’t more Shorthorn breeders crossing a few for sale, I really like them.”

Going forward, this information will be used to find the cows that are the most efficient and look to retain heifers from them, thus improving the weaning efficiency of the herd.

Weighing in the winter

The Monkhouses have started selling youngstock to a private buyer months earlier than previously, after looking at weight gains and the cost of achieving those gains.

Each day the store ration of soya, minerals and barley (£200/t) costs £1.60 a head for 8kg of ration/day, including the cost of a visit from a mill and mix machine.

There are also six to seven silage bales and straw bedding every week to account for, with Mr Monkhouse calculating a rough wintering cost of £2 a head/day.

Selling earlier is a trade-off between saving feed and labour costs and selling smaller calves for less, he explains.

Mr Monkhouse is now considering selling bulls in December and heifers in January, depending on the customer’s requirements.

1.31kg Average daily liveweight gain of the Shorthorn-cross calves for the past two summers – 1.12kg/week more than the Limousin calves