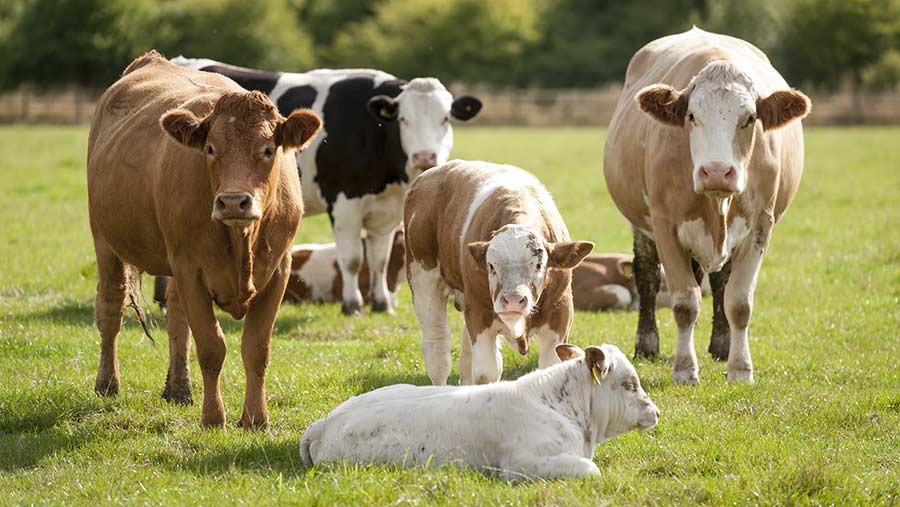 Faith in estimated breeding values (EBVs) has been paying off for a Nottinghamshire beef herd for nearly 30 years, resulting in maternal and terminal genetics to suit both the farm and the market.

Financially, Mr Willison maintains there is a “marked difference” in calves from high-EBV sires compared with the average – and also in offspring from replacement daughters.

The two bulls were used as part of Mr Willison’s AI breeding programme in a 50:50 split to get a balance of calves and enough selection pressure for replacement heifers. Anything not successfully inseminated in six weeks is given one cycle with a home-bred pedigree Simmental sweeper bull.

“The sweeper bull needs to be a decent all-rounder,” explains Mr Willison, who runs two AI cycles for cows and one for heifers, looking to calve heifers by two years of age.

“I can’t have the sweeper too extreme one way or another. Generally speaking, the focus is on maternal EBVs when choosing AI bulls. The first thing I look at is a combination of daughter calving ease, milking ability and then growth, as opposed to muscle.”

He stresses the importance of “keeping a balance” and not following certain traits too much. Following muscle will lose growth, milk and fertility, while choosing easy-calving bulls and ignoring daughter calving ease will lead to breeding females with small pelvises, explains Mr Willison.

One of the benefits EBVs have brought for Mr Willison – a beef farmer who left the dairy industry in the early 1990s – has been the ability to match bulls to individual cows.

“It is hugely important for me whether a bull is recorded one way or another and the present EBV system is the best one we have, due to the vast amount of information used from relatives and offspring to predict what traits are likely to be passed on,” he explains.

“I match first- or second-calvers to bulls with better direct calving scores, while for third-calvers and upwards I don’t need to worry as much and can look more towards better muscling. We really put calving ease to the fore in first- and second-calvers.”

Mr Willison rates the Simmental highly, but values the Blue – used once in each line – as a cross to open up genetics.

“It’s the same at the top end of any genetics in livestock – the pool does become limited,” he admits. “Crossing allows us to get the best from both breeds.”

In Mr Willison’s experience, top 10% bulls are more profitable than the rest and EBVs are a tool to find genetics best suited to the job required on his own farm.

And as far as performance recording goes, Mr Willison’s outlook is simple: the more EBVs and progeny data there is, the better-informed choice you can make.

“When I entered the beef industry, the Signet system was just coming into its own,” he adds. “We have always bought the top-end recorded bulls of the day and as we have gone along we have seen the difference each year.”

Genetic breed gains and increasing data on progeny performance mean Volvo and Decision’s EBVs have changed slightly since they were first used at Williamswood in 2013.

But Mr Marsh says this is inevitable and certainly not a bad thing. “Volvo now has a slightly higher index of +89 but Calving Ease Direct has slipped further to –6.6%,” he says.

“Likewise, Decision’s index has increased to +57 but Calving Ease Direct has improved to +6.1% as data builds and strengthens EBV accuracy.” 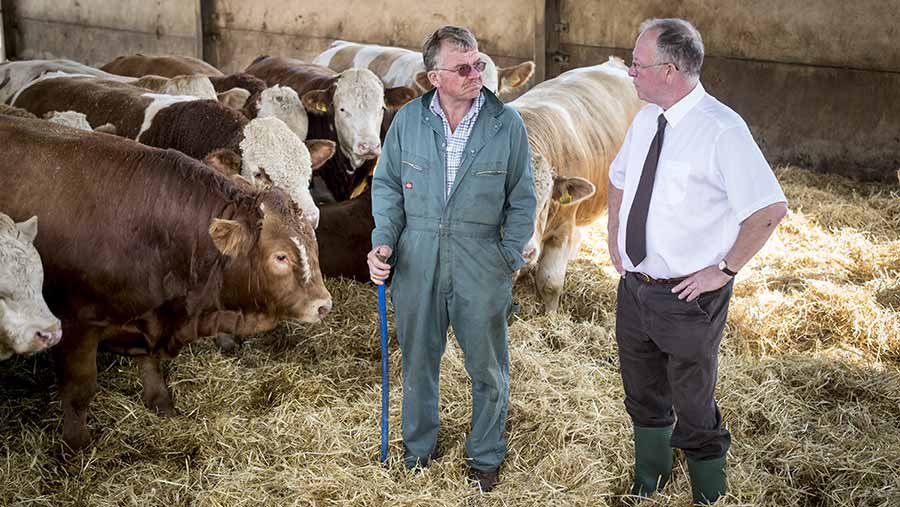 Mr Marsh says that no one breed is best but that he would have “failed professionally” if a Harper Adams graduate was to buy bulls without looking at EBVs on entering the beef industry.

The simple message for commercial producers is to pick a breed combination to suit the farm, environment and market, using high-index bulls with appropriate EBVs for the system in hand, he stresses.

It is the array of breeds (25 native and 15 continental) that creates the “incredible passion and interest” for the industry, he explains.

“This is why I get so much enjoyment working in it,” says Mr Marsh. “Sadly, though, it doesn’t help the processors, who have to deal with a range of carcass weights, fat and conformation grades and ages with all the different production systems and breed combinations.”

A third AI bull, Dirnanean Bradley, was used at Williamswood in 2014. A real “curve bender”, Bradley won at the Royal Highland Show the same year and his eye-catching qualities were backed up on paper by positive calving ease figures, massive growth and a TSI of +116.

Bradley also proved to be a winner on the farm, producing lighter calves with an average birth weight of 46.4kg that rocketed to higher 200-day weights (bull and heifer average of 335kg), adding to the proof that EBVs are trustworthy and accurate, according to Mr Marsh.

He wants to see people end the practice of buying bulls purely “on eye” alone, likening EBVs to horse power and torque when buying a car or tractor.

“You wouldn’t buy a tractor without asking about the specification, so why buy a bull?” he asks. “You obviously need to see a bull in the flesh to assess locomotion but too many producers are obsessed with having a masculine head – why?

“This criticism is often levelled at curve bender bulls, which are the bulls the industry needs. What happens to the head of a bull at an abattoir – it gets binned!

“One pedigree breeder on hearing my comments asked if I would marry an ugly woman! Beauty is in the eye of the beholder and if she had an ugly head I wouldn’t have her shot!”