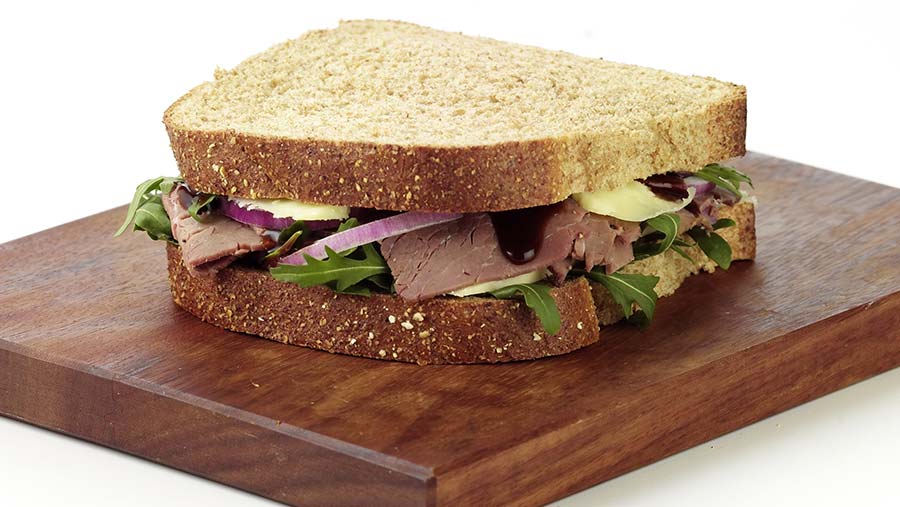 Livestock farmers are urging consumers to “beef up your butty” as the nation celebrates the start of Great British Beef Week.

Beef Week kicks off today (Saturday 23 April) – St George’s Day – and is designed to raise awareness of the quality and versatility of great British beef.

Industry leaders hope the celebratory week will also help stem the slide in beef prices, which have fallen to their lowest level since August 2011.

Organised by Ladies in Beef, this year the emphasis is on “beefing up your butty” – a celebration of the 5.7bn sandwiches eaten by British consumers every year.

Beef farmer’s daughter Sophie Cumber, a member of Ladies in Beef, said: “Butties are a mainstay of our lives, so it’s important they are a nutritious part of the weekly meal plan.

All beef carrying the Red Tractor logo can be traced back to the farm where the livestock came from, guaranteeing the provenance of the meat purchased.

For inspiration, the Ladies in Beef website includes a special “ultimate beef butty” video, as well as a range of recipes, beef-cut information and some fun “Moo” dances.

They will also be out on the streets giving away British beef sandwiches and will host a range of local events run in conjunction with the Royal Agricultural Benevolent Institution.

Figures from AHDB Beef & Lamb suggest the average beef price slumped to 325.2p/kg in March 2016, losing nearly 5p/kg since January and about 29p/kg since March 2015.

NFU livestock board chairman Charles Sercombe said he was delighted at the return of an annual event to promote British beef at a time when the sector faced significant challenges.

“Millions of pounds are being wiped off the value of the payment grids, leaving many producers questioning the viability of the industry,” said Mr Sercombe.

“We need initiatives like Great British Beef Week to raise awareness among shoppers of great British beef and to re-engage with consumers.”

Shoppers were continuing to call for greater provenance and clearer labelling of the origin of food products, said Mr Sercombe.

The NFU recently produced an online supermarket sourcing guide in a bid to show shoppers which of Britain’s big retailers are backing British farming.