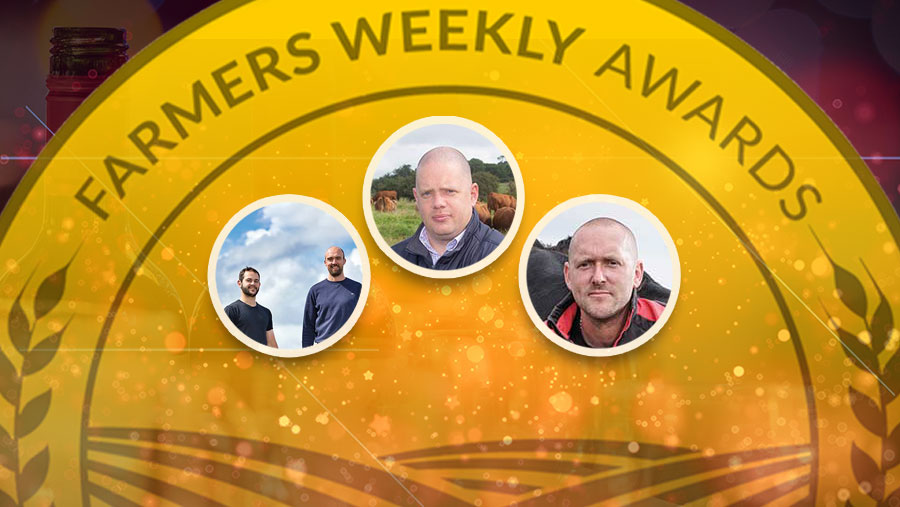 A pedigree, commercial and dairy beef unit went head-to-head. Each showed impressive cost control, engagement with stakeholders and consumers and optimal, rather than maximal, output.

Maximising days at grass by cell-grazing has allowed two brothers to grow their dairy-beef enterprise and maintain strong profits.

Aled and Iwan Evans started farming in partnership in 2015 to rear native-cross beef cattle, targeting a 305kg carcass at 23.5 months.

The system produces about 325 finished animals annually, starting with bucket-rearing week-old calves and then letting grass and forage do the rest.

Investing in a calf-rearing shed, handling facilities, buying 28ha (70 acres) nearby and starting a contract-rearing arrangement with Llifon Davies – the one full-time member of staff on the team – has allowed numbers to grow from 180 to 650 head.

Recent developments include forward contracts for calves, where the brothers select short-gestation, easy calving Hereford or Angus bulls and buy semen for the farm. This guarantees calf supply.

This year, the farm has pioneered the development of a regenerative agriculture certification with US accreditation scheme A Greener World, which looks holistically at the entire farm system.

Calves arrive from mid-February to late April. Milk is fed twice daily in a climate-controlled shed with automatic roller-shutter doors and roof ventilation.

The farm works with Friesian-type herds and with calf rearers who have good hygiene and colostrum protocols.

Weight gain is tracked from weaning at 80kg on Border Software when calves are tagged using electronic identification. Mortality was less than 0.5% across 320 calves this year.

This greater cover provides more leaf, which puts more energy into the plant and grows deeper roots, they say. Water infiltration rates are 75% faster as a result.

Opting for native-sired dairy-cross cattle rather than continentals has meant sacrificing 25kg of carcass (£87.50 at £3.50/kg), but saves £300 on concentrates.

Last year, the team calculated that grazing costs the farm about 5p/kg DM, compared with silage at 12p/kg DM and concentrate at 20p/kg DM.

The farm used to make 121ha (300 acres) of silage, but now it only needs 64ha (160 acres) because rotational grazing has shortened the winter by about a month at each end. As well as supplying Dunbia, it sells beef to a London butcher and a large restaurant chain.

All this means the farm’s basic payment is less than 10% of farm income.

The working week has been limited to 50 hours to ensure everyone in the team has a good work-life balance and can make good decisions at work.

Aled and Iwan recognise they have found a talented and hard worker in Llifon, so have ensured he takes an active role in quarterly review meetings and strategy sessions.

Llifon has been incentivised with a profit-share agreement so he can benefit from business growth, and he takes charge of the sheep at lambing.

“Starting with profit and lifestyle targets and working backwards has seen the Evans brothers build a low-cost and productive system. Cost control is exceptional, as is their ability to plan and budget for the future.” 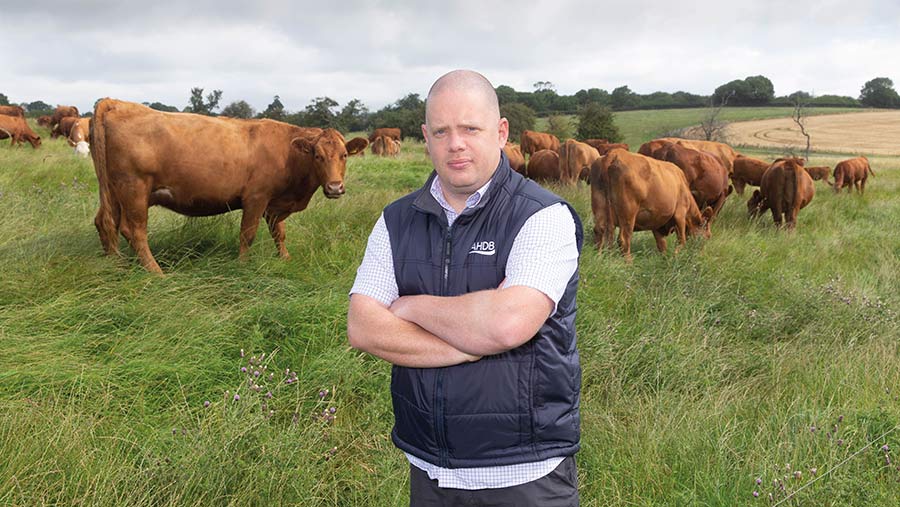 Mark and his father, Jim, expect to yield 10-12t/ha with biscuit-making wheats and 6.5t/ha with malting barleys on their medium to heavy loam soils. However, they cannot cultivate one-third of the farm that is permanent pasture – most of it is undulating rig-and-furrow fields.

This is why cows were introduced in 1990, when Jim started a spring-calving Hereford cross Friesian flying herd using Blonde terminal sires.

They used to finish bulls at 430kg deadweight until a TB breakdown in 2017 took 28 cows. This encouraged a switch to a closed herd and maternal genetics to produce 350-380kg carcasses.

Haylage was made for the first time in 2020 in blackgrass-hit fields and cow size has fallen 100kg to 650kg, which has aided a move to rotational grazing. Mark started selling beef direct on Facebook when Covid lockdowns limited demand from a local catering outlet.

An annual mortality rate of 1.2% means the herd rears 95% of calves weaned for every 100 cows bulled. This year, with twins, they have 96 calves from 91 calvings. The old dairy-cross system also used to achieve 95%, but with more labour and antibiotics around calvings.

Most of the cows are now Stabiliser or Stabiliser-cross. The new breed’s calves average 41kg – 12kg lighter than the previous dairy-cross progeny. Vigorous calves and quick, unassisted calvings are helping keep antibiotics use and mortality low.

The calving interval is 18 days shorter in the Stabilisers, at 343 days, which has shortened bulling time to 10 weeks.

Bull carcasses are 31kg lighter at 315kg and finish in a similar timeframe. However, this is with very maternal Stabiliser bulls and a high proportion of breeding heifers in the herd.

The herd uses a feed bucket and straw chopper and shares a tractor, loader tractor and telehandler with the arable unit, helping dilute fixed costs.

The free-draining rig-and-furrow land allows cows to be housed around Christmas and calve in mid-February – some cows are only housed for 10 weeks.

A 29t load of rapemeal is bought to feed cows through this period, alongside ad-lib straw. Barley is added a month before calving to lift energy and colostrum production.

All weaned cattle are housed and bulls are finished on ad-lib straw and barley (half urea-treated and half rolled), plus ground limestone.

Growing cattle are given haylage and straw. No mineral buckets, boluses or blocks are used. If grass is short, cattle are supplemented with hay or straw when turned out a day or two after calving.

Mark and Jim have farmed the holding themselves for 15 years. They do their own combining, fertilising, secondary cultivations and drilling. Contractors make silage, spread muck and do primary cultivations.

Mark’s industry involvement extends to working on various projects and schemes with the AHDB, NFU, Defra and the Responsible Use of Medicines in Agriculture Alliance.

This takes four days a month of Mark’s time, so they have taken on a local builder – with an interest in farming – part-time.

Labour at calving is optimised through a calving camera, and every cow and calf passes through one of six calving pens. Dehorning is being eliminated through use of polled bulls.

“Good business acumen and cost control have allowed Mark to make the cows profitable and worthwhile alongside an arable business. He has changed breed, rebuilt numbers and been a huge asset to the wider farming industry.” 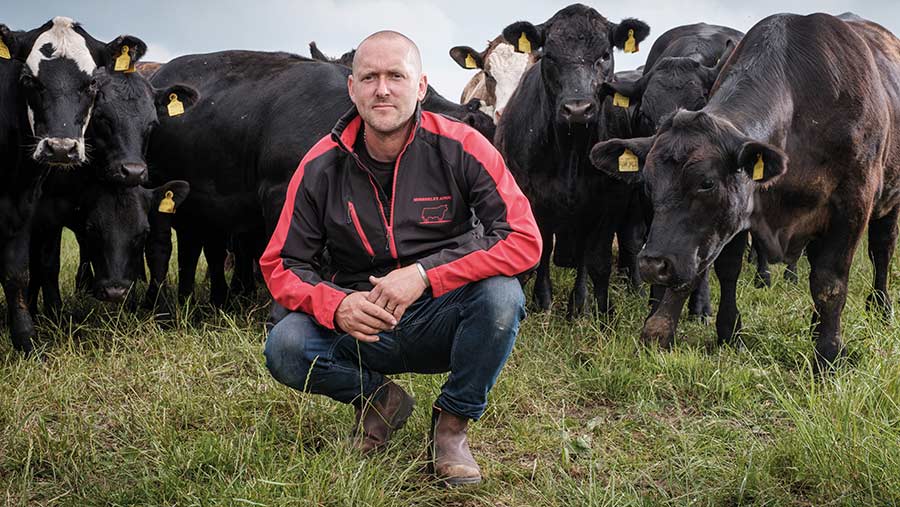 Many in British suckler farming can learn from Ian Norbury. He has a great story to tell and does a great job of telling it.

Technical innovation abounds in this profitable grass-based enterprise, which has built in resilience with four on-farm business lets, field rental for weddings and storage units, added since Ian took over the reins 10 years ago.

The aim is to continue cost-cutting and further develop the Mobberley Angus brand, which is becoming known for quality beef and functional Angus genetics.

Growing from 65 to 115 cows has helped cut fixed costs, but the plan now is to optimise the farm and allow Ian to spend time with his family, rather than just see him chasing scale.

Plant and animal genetics have played a part in business progress. About 15-20% of the farm is reseeded each year with high-sugar ryegrasses and clovers.

The team has been learning about rotational grazing for a decade, trying to follow a three-week, three-leaf rotation, aided by weekly sward monitoring using AgriNet and a GPS plate meter.

Selecting heifers from the first cycle has bred fertility into the herd, allowing bulling periods to drop from 21 to 12 weeks. Cows getting in-calf in the first two cycles has rocketed from 40-50% to 80%.

MiIky cows and improved sward quality has added 120g/day to calf daily liveweight gain – with calves currently growing at 1.43kg liveweight/day up to weaning. This is from a 680kg cow (50kg lighter than 2016) that weans 43% of its weight, up from 37% five years ago.

Cattle are increasingly finished on grass at 16-19 months, avoiding an expensive second winter.

Gains have been made while almost doubling the herd and cutting costs. The farm has made a net return on capital of 18%, 16% and 11% in the past three years on AHDB’s FarmBench.

The route to profit has been down to herd growth and cost dilution, as well as cutting wintering periods from 21 to 13 weeks. A mob of youngstock were outwintered on silage, forage rape and ryegrass for the first time last year, again cutting labour and straw costs.

Some costs – such as calf creep-feeding – have been completely removed, while mineral costs have been slashed with the help of Wright and Morten vets. The farm now uses a mineral bolus at £4.60 a cow instead of buckets at £22 a cow, saving money and limiting attraction for badgers.

Part-time help from Ian’s father, Geoff, and the family is supplemented with casual labour from 18-year-old Jack Ancell.

To maximise labour, the farm has installed calving cameras, recording using electronic identification, a state-of-the-art silent crush, and extra-long overlapping gates to block roads, allowing cattle to be turned by one person.

A calving period of 12 weeks – as opposed to 21 – reduces summer labour so the team can focus on rotational grazing.

Electric fencing systems are mains fed and controlled remotely so all cells can be switched on or off anywhere on the farm. This costs £20/year to run (saving £300/year on batteries).

“Ian has built a reputation for producing pedigree genetics that thrive off grass, while showing an eye for shrewd, time-efficient business diversifications to grow farm income. Winter cost control, fertility and grass production are key strengths.”

ABP Food Group contributes an estimated €1.3bn each year into the rural economies in which it operates.

We recognise that the farmers who supply meat to us are vital partners in ensuring that the quality of our product is maintained and traceability is ensured.

Our core business – ABP Beef – is supported by its renewable, pet food and protein divisions, which combine to ensure the value of by-products is maximised and the environmental impact of our business and customers is minimised.