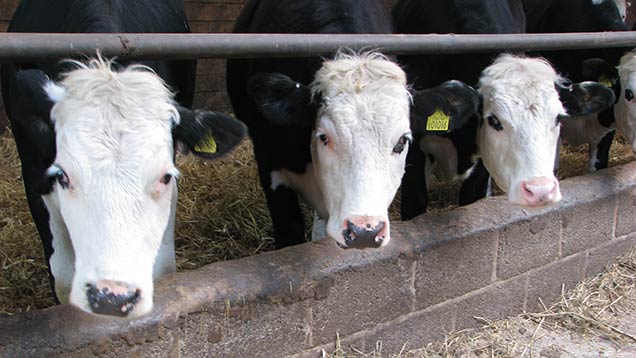 A flexible beef production system on a North Yorkshire farm is offering some protection against volatile cereal prices and helping to improve cashflow.

Home-grown barley is the principle ingredient in the beef cattle diet at Dromonby farm, Kirkby, Cleveland.

For the past eight years, Tom Seymour and his father John have kept 250 head at any one time on the 240ha mixed farm, which also carries a large flock of North Country Mules.

When the barley price dipped as low as £60/t and the beef price was buoyant, the Seymours decided it would make economic sense to use a proportion of the grain to feed their own livestock, explains Tom Seymour.

“We had kept a suckler herd many years ago, with a British Blue or Simmental bull put to dairy-cross females.

“However, after a review we concluded this policy was not making best use of the buildings, as some were standing empty over the summer. So we decided to sell the cows.”

After selling the cows, they started buying in stores at 400-450kg and finishing them on a total mixed ration (TMR), comprising home-grown beans, rapemeal, wheat, barley and straw.

“But we then took the decision to reduce numbers, partly because we were concerned about having such a large amount of capital tied up in one enterprise.

“We also felt we were taking too much risk for too little reward.”

See also: Why more beef farmers are switching to Luings

Downsizing meant feeding a TMR was no longer feasible, as it was difficult to justify the time the family spent making sure the reduced numbers had fresh feed put in front of them regularly.

“Two local farms have been supplying us with calves for several years,” says Mr Seymour. “We usually pick up 10 Hereford-crosses from one neighbour and five to six Limousin-crosses from another each month.

“It suits us to have a private supply and we have an agreement that they will be given an intra-nasal treatment, to protect them against pneumonia, before they are moved. They also receive two doses of a respiratory disease vaccination after arrival.”

The staple home-grown barley offered to the cattle is rolled using the farm’s own mobile mill.

All the weaned calves start off on a diet of 50:50 barley and high-protein calf pellet.

The latter is gradually decreased until they are moved fully to the finishing ration, by the time they reach the 20-week period. It comprises 75% rolled barley and 25% bought-in protein pellets.

The bulls, which are mainly Hereford-crosses, are taken to 15 months and offered the finishing ration on an ad-lib basis, plus straw.

Meanwhile, the heifers spend a summer at grass and receive silage and 3-4kg of the ration a head a day during the winter. Also included in both diets is a proprietary yeast culture, to stabilise rumen pH and aid digestion.

The Seymours monitor the beef price closely and all the cattle are weighed before leaving the farm, to provide information on performance and give an indication of potential returns.

Due to lack of time, deadweight selling is limited to those weeks when a full transport load of cattle are ready for slaughter.

This equates to roughly half of all the finished animals each year and results in an average deadweight of about 320kg for bulls and 300kg for heifers.

The majority of bulls reach R-grade and kill out at 54-56%, with the heifers mostly achieving O+ and R-grades and killing out at an average of 52%. Smaller batches are taken to the local mart at Darlington, as the family is keen to support the auction system.

A third strand of the production policy involves selecting the best 50% of the 18-month-old heifers and putting them to a pedigree Limousin bull, which is hired from John Elliott, County Durham, for a six-week period.

This tight calving pattern inevitably leads to a small percentage showing empty after pregnancy testing at 26-27 months and these are moved back into the finishing group.

Successful breeders are sold with their calves in the spring, either to private buyers or through a livestock agent.

“Prices for both barley and beef have fluctuated wildly since we reorganised our cattle enterprise, but calf values have remained fairly steady,” says Mr Seymour.

“Walking some of our cereals off the farm and having a range of outlets has improved cashflow, provided some insulation against market volatility and ensured the buildings are occupied year round.”