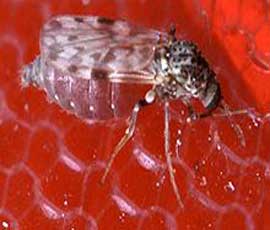 A strain of fungus could be used to control the insect-borne bluetongue virus (BTV), potentially preventing thousands of losses to farmers each year.

Such findings could be helpful for farmers looking for alternative options for controlling midges as the number of available insecticides diminishes. The study is particularly timely as new EU directives are encouraging member states to develop integrated pest management programmes which use benign plant protection products.

Dr Ansari conducted trials using adult male and female midges and found the fungal susceptibility test identified the fungus Metarhizium anisopliae V275 as highly virulent in both the lab and under greenhouse trials – killing the insects within 24 hours.

The tests also revealed that increasing the dose of fungus decreased the number of midges that survived. Encouragingly, the efficiency of the fungus was shown to increase when applied to certain substrates such as manure – suggesting success in future field tests.

Professor Tariq Butt, Swansea University, says the fungi could, potentially, be applied cost-effectively to the places where adult midges rest – such as animal housing and livestock – to effectively target known problem areas.

“The next step is to test the fungus in large-scale field trials with the eventual aim of developing protocols for its simple and economical application in BTV endemic countries,” he says.