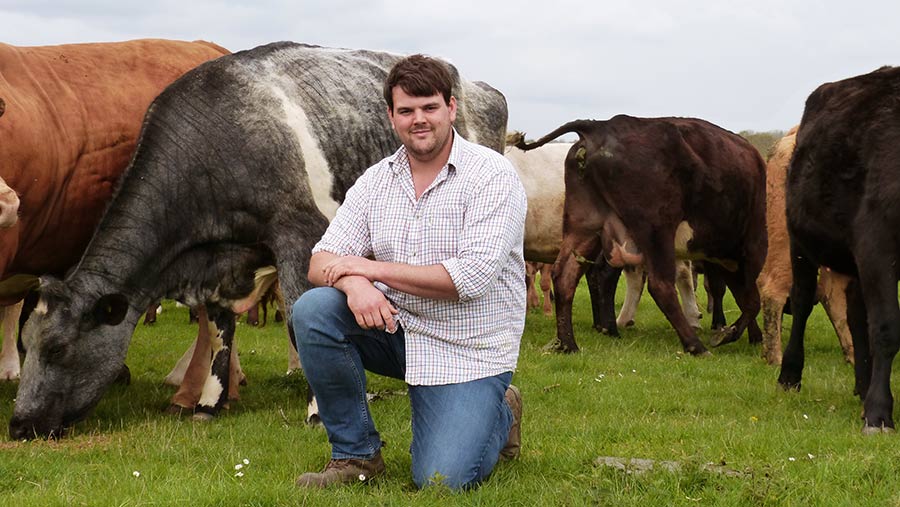 Suckler-finisher Sebastian Richardson and his family have cut antibiotics use by 74% since 2015.

In a pioneering approach to his herd management, Mr Richardson of Townsend Farm, Oundle, has been monitoring drug use by recording the amount of active antibiotics used and dividing that by deadweight output.

Drugs use in the 90-head cross-bred herd, which he farms with parents James and Deborah and grandparents John and Isobel, has fallen significantly.

Antimicrobial stewardship is something Mr Richardson feels passionate about and he is also seeing improvements in his sheep flock, which he runs alongside an arable operation.

“I’m trying to farm more sustainably, and this applies to the lambing shed as well,” he explains.

“Unless I’m advised by our vets, I don’t intend to use a critically important antibiotic.

“However, it’s important to nip diseases in the bud early and remain as vigilant as ever,” says Mr Richardson, who adds that vaccinations don’t eliminate the need for antibiotics.

Below are ways in which they have reduced antibiotics use:

How the system at Townsend Farm works

Last year, calf sales amounted to 85% of the cows put to the bull in the autumn herd and 88% in the spring herd.

An Angus bull is used on the heifers, with two Limousins serving 25 cows each and a small herd of Longhorn-cross cattle served by a Longhorn bull to graze extensive low-input river meadows.

Bulls are kept entire and sold on contract to Dunbia hitting 400-420kg carcasses on mostly U-grades with 4L and 3 fat covers at 13-14 months.

The home farm of Cotterstock Lodge is used as the breeding farm.

Two miles away, a finishing unit with a mill-and-mix machine is used to finish cattle.

Bulls are finished on an ad-lib ration of 3kg of rolled barley, 1kg of a bought-in 18% crude protein pellet and 1kg of sugar beet pulp and barley straw, which costs £2 a head/day or £360 a bull over a typical finishing period.

Bedding and feed are administered by hand, meaning machinery is minimised and cows are kept in a low-stress environment.

Heifers are finished on ad-lib silage and receive the bull ration after 18 months of age.

Only heifers from dairy-cross mothers are retained. Heifers are bred to calve at about 24 months.