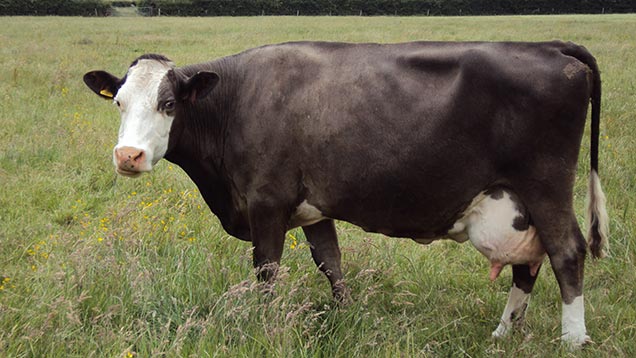 Gardenia, a 12-year-old Simmental-cross cow, has been put forward as a Livestock Legend by her owner Nick Hudson, who runs a 52-cow organic suckler herd.

The on-farm bull is Aberdeen Angus. All offspring are either retained on the farm as replacements or finished and sold to the local abattoir for the organic trade.

Mr Hudson says Gardenia is an outstanding cow in many ways.

Born on 31 July 2003, she arrived on his farm in 2004, producing her first calf in August 2005, with subsequent calves being born a month earlier each year until the ideal calving period was reached in 2008 when her calf was born in March.

To date, she has produced 11 calves – six daughters and five sons.

Mr Hudson says: “She is quick to get in-calf and is one of the first cows to calve each year.

“Given this, and the copious amount of milk she produces, her calves are always the biggest, heaviest ones with the best conformation.”

Mr Hudson describes Gardenia as the matriarch of the herd, adding she is by far the most intelligent cow with a “calm, unflustered outlook on life”.

“She has an instinctive understanding of what I am trying to achieve when attending to or moving the herd.

“When they are due to pass through the race to the crush, she is always keen to go through first even though she doesn’t know what is about to happen, be that bolusing, injecting or foot-trimming.

“Her relaxed, totally trusting nature means that she can be inspected in the field without having to move her to a crush.

“And should one of her newborn calves be struggling to find her low-slung teats to suckle, she happily stands still while I manoeuvre the calf into position with the calf’s head in one hand and a teat in the other to achieve union.”

Mr Hudson has retained three of her daughters in the breeding herd and as a result she is related to nearly one-quarter of the herd – three daughters, two sons, two granddaughters and four grandsons.

Do you have an animal in your herd or flock that is outstanding in terms of its performance?

Farmers Weekly’s livestock team is keen to hear from farmers about the star-performing animals on their farms – whatever the species or key performance indicator (KPI) used.

Maybe it’s a suckler cow that has produced an unusual number of calves over its lifetime, or a dairy cow that is a particularly efficient producer of milk. It could be a pig that has had a high number of piglets weaned in her lifetime or a ram that produces lambs with good growth rates.

If you have a high-performing Livestock Legend you wish to share with us then send a picture and a short description to the livestock team at fwlivestock@rbi.co.uk or call us on 020 8652 4935.