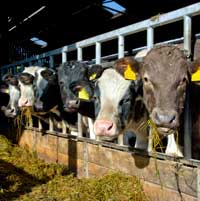 So far so good with bluetongue. A better vaccination strategy in Europe has reduced the risk of diseases spreading to the UK; demonstrating again that our best defence against exotic diseases such as bluetongue and F&M is to control them better elsewhere.

Unfortunately the absence of disease may have bred complacency, with very few reports to Defra of potential bluetongue cases. To eradicate the disease we need to be vigilant, so be on the look-out for potential problems and get Defra involved if there’s any suspicion.

The number of reports of hypomagnesaemia was very low this spring, even though the number of reports at the start in March seemed to suggest that there would be many cases. Autumn has so far turned out be different with reports in August and September being around average and higher than their equivalent months in spring. This is the sixth out of the 13 years that NADIS has been active when autumn figures for hypomagnesaemia are higher than those in spring.

Comparing overall figures provides no evidence that cases of grass staggers in the spring are correlated in any way with the total number in autumn. However, comparing individual months there is more of a relationship. Cases in March mirror those seen in August, but those seen in April are not related to those seen in September.

Fertility reports were nearly static in September as decrease in the number of non-detected heats was matched by rises in other problems, particularly endometritis.

Over the whole summer period infertility reports were significantly above average and very similar, except for an unusually high July figure, to last year’s figures. Was it temperature related? It seems unlikely, as across all regions of the UK the difference from the long-term average was never much more than 1C .

Endometritis reports increased in September but remained below last year’s very high figures. Overall this year’s figures have been lower than last year but, like last year, the summer dip in cases has not been as prominent as normal. Between April and September the average number of cases per month was 495, over 100 more than the long term average for that period

Seasonality of reports of endometritis so far this year compared to previous years, highlighting the high number of reports in May and July

As the end of the grazing period gets nearer, more attention to lameness is essential. The two most important diseases at this time of year are white line disease and digital dermatitis.

The former usually has a late season peak in September and October. However this September there was a fall in the number of cases from a very low number in August, which meant that for the third year in a row more cases of sole ulcer were reported in September than white line disease.

This suggests that there may be a change in seasonality of white line disease, with the peak, relative to sole ulcer, now being delayed to October.

Change in ratio of reports of white line disease to sole ulcer in September and October, showing the close but not exact relationship

Last year the number of New Forest Eye outbreaks almost reached the long-term average. However this year there have been very few cases reported, with August having the lowest number of reports ever for that month and September being even lower. The drop-off is extremely dramatic. Any suggestions as to its cause are very welcome.

Both calf scour and joint ill reports increased in September but both were from a very low base. For calf scour this low base is representative of 2009 so far, but for joint-ill August was an unusually low month in a summer where most months were above the long-term trend and even with this low August, joint-ill reports during the summer matched the average for the season.