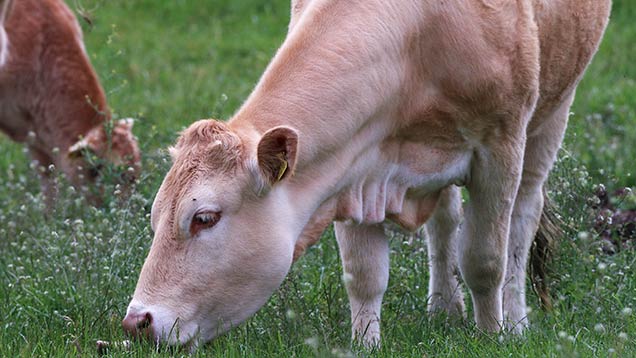 Cattle farmers are being urged to create a grazing plan now to avoid the increased risk of worms this summer.

It is the warm, dry spring that has affected cattle parasites, says vet Peers Davies.

“We are going to see larger numbers of infectious larvae on pasture earlier on in the year and this means they will multiply more quickly. So we are going to have a larger risk of parasitic disease in the late summer to early autumn, when we would normally see most cases of scouring and ill thrift in calves.”

Early signs of gutworms in summer/autumn

Mr Davies advises farmers to make a grazing plan to avoid heavily contaminated pastures – especially with youngstock, which are at high risk.

“Think how to use safe grazing and pasture rotation to use silage aftermaths for youngstock in their first grazing season. This will allow a break from the build-up of parasite infection at pasture.”

Preventative treatments are also needed to break up the development of resistance and the level of parasite challenge the stock are facing, he adds.

As the weather is warming up, risk of lungworm is also on the increase, says Mr Davies.

“This disease can be seen at any time during the grazing season, but it is the most unpredictable of all parasites,” he warns.

It is particularly a problem when wet weather follows a long hot, dry spell, as large numbers of infectious larvae will be excreted onto pasture over a very short period of time.

Mr Davies says: “Clinical signs and disease will appear very soon afterwards, so vigilance is absolutely essential with lungworm in order to prevent quite serious losses.”

Prevention through vaccination is possible and is very effective. Treatment is also very effective if given promptly after infection. Without it, there could be high numbers of dead animals over a very short period of time, says Mr Davies.