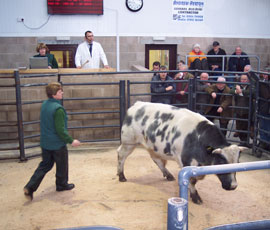 Brockholes Arms Auction Mart, Preston, Lancashire Prime cattle numbers were slightly down at Tuesday’s (24 May) sale, with 46 head going under the hammer.

However, trade was noticeably sharper than the week before, said auctioneer Richard Furnival. “Quality would be back on the week, but overall cattle would be 2-3p/kg up.”

Limousin-cross heifers sold to 212p/kg, with steers topping at 184p/kg and all cattle averaging 163.93p/kg. Demand for bulls was also strong, with a Limousin taking the top price of 169p/kg. Black-and-whites sold to 148p/kg.