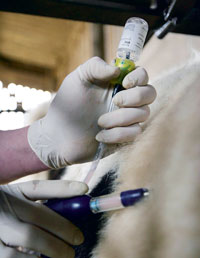 The UK is more at risk from bluetongue due to farmers importing animals than from wind-bourne spread of the disease from mainland Europe, according to vets and epidemiologists.

Latest import figures from Animal Health reveal that in the first quarter of 2010 (Jan-Mar) nearly 5000 animals were imported to Britain.

They are also urging producers to vaccinate and revaccinate their stock.

Nicky Paull, past president of the BVA and member of DEFRA’s Bluetongue Core Group, said: “Now is not the time to become complacent on bluetongue and it is essential to continue vaccinating against the disease.

“Previously the main threat to the UK was wind-borne midge incursion, but we are now being told by a panel of experts (the Bluetongue Experts group) that import carries the greatest risk.

“We understand that farmers are desperate to replace culled TB reactors in cattle herds, but we would urge extreme caution when importing stock from areas where BTV8 has been circulating.”

Vets are also warning that the infection could arrive through infected foetuses. Although all ruminants from the EU BTV8 Protection Zone are blood tested upon arrival, a small but significant number of pregnant animals could be carrying a BTV-infected foetus and still be negative to any blood test.

The newborn animal could infect the local midge population and restart the circulation of the disease.

If that happened Britain’s aim of achieving Low Risk or BTV-Free status would be set back for at least another year, prolonging the need for vaccination.