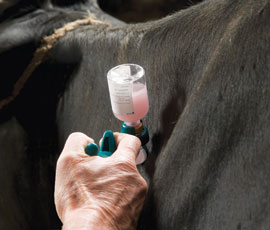 Uptake of the Schmallenberg vaccine on dairy and beef farms is expected to be low, according to a Welsh vet.

Ian Jones, from Hafren Veterinary Group, Newtown, Powys, said many cattle farmers would be unable to treat their highest-risk animals because of the timing of the vaccine’s release date.

The vaccine went on sale earlier this month after the Veterinary Medicines Directorate granted a provisional marketing authorisation to get the vaccine fast-tracked. However, it means the product can only be used under strict guidelines.

One of these strict conditions is that the vaccine cannot be used in pregnant animals.

Under administration guidelines cows must be given two 2ml doses four weeks apart and farmers are being advised to leave it another three weeks before breeding.

But Mr Jones explained most spring-calving herds would now already be back in with the bull and could already be pregnant, which means they would not be eligible for treatment. Meanwhile, autumn calvers are already in-calf and cannot be treated either.

“The real disappointment for us is that the vaccine was released a month late,” he added.

“There will be a significant reduction in the uptake because many people will have already put the bull in with the cows. Unfortunately it’s going to reduce the number of spring-calving suckler herds the vaccine will be used in.”

Had it been released earlier, Mr Jones said these cows – which are most at risk heading into the height of the midge season because they will be early in calf – would have been protected.